How Game of Thrones Will End (Spoilers!) (UPDATED)(X2)

OK, unlike the last post, this one is actually about Game of Thrones and I will discuss everything that has happened through the end of the fifth season. I will also invent spoilers and make wild, and probably inaccurate, prognostications about the way the show and the books will end.

So, the going assumption amongst fans of Game of Thrones is that Dany will swoop in with her dragons and save the day against the White Walkers. They believe that a strong woman is needed to unite the seven kingdoms and save them from certain doom. And this all is probably true: that is what Westeros needs.

But since when does Westeros get what it needs?

After all, Westeros is a place where everyone who is good or kind of good or just or beneficial to the realm is killed. Jon Snow? Killed by his men at The Wall for the crime of depriving the White Walkers of undead troops. Ned Stark? Killed at King's Landing for discovering that the psychopath on the Iron Throne is a bastard. Robb Stark? Betrayed at a wedding. And that's just the Stark family: Stannis futilely sacrificed his daughter to the fire god, thus earning the enmity of viewers; Dany's stuck in the quagmire of Meereen; and the evil Boltons have as secure a grasp on power as anyone in the land.

So anyway, this idea that Dany's going to come riding in with a horde of dragons and/or a new Dothraki horde and save the day against the zombie army when it comes crashing through the wall? That's a pipe dream. What have you seen thus far that leads you to believe that the show will end on a note of positivity or triumph? You people are nuts. If we know anything about Game of Thrones, it's that it will likely end with some variation on this shot: 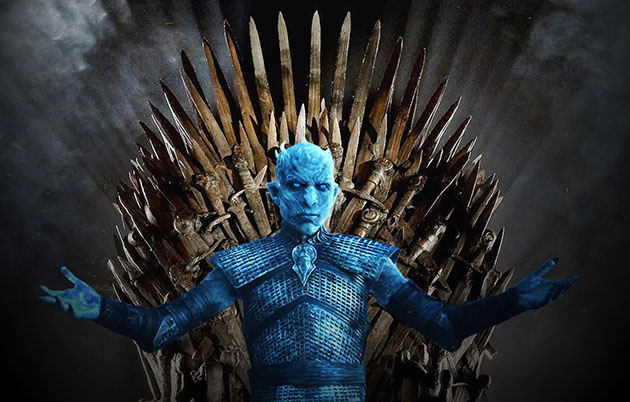 You people don't seem to understand: George R. R. Martin is Rorschach. For years now  you've been looking up, shouting for him to save you. And he's constantly—constantly!—looked down and whispered "No." Why think the show's finale will be any different from its beginning or middle?

Guys. We've been thinking about this all wrong. ALL F—KING WRONG. What if—and bear with me here—but what if the White Walkers are actually the heroes of the story. I just laid it out on Twitter:

Why do we just assume that the White Walkers are "bad"? Why do we automatically want the people of Westeros to defeat them?

What do we know about Westeros society that makes us think White Walker society is "worse" than any of the Seven Kingdoms? Indeed… — Sonny Bunch (@SonnyBunch) June 15, 2015

… isn’t it reasonable to think that the White Walkers are actually liberators here to save the Westerosi from their wicked rulers? — Sonny Bunch (@SonnyBunch) June 15, 2015

Yes, sure, the White Walkers "kill you." But then they resurrect you in a superior form!

Put a White Walker on the Iron Throne. End the generations of death and destruction. #TeamWhiteWalkers

Apologies for embedding my own tweets (very gauche, I know). But tell me I'm wrong! Tell me that Westeros is better off under the thumb of the psychos who have taken their turn at the top of the wheel Dany so despises! Sure, the White Walkers aren't perfect. But, frankly, we don't really know anything about them! Just because they're The Other, that doesn't mean they're bad. Give the White Walkers a chance!

George R. R. Martin's long game is very strong. Who's to say he hasn't been prepping us for something this drastic?

Unlike most inhabitants of Westeros, White Walkers are pro-life. Consider the following scene:

The Walkers come across a baby left for dead by a cruel Westerosi lord. Rather than leave the newborn to die, the Walkers take him home and perform a ceremony that allows him to live. They literally care for him as one of their own. Contrast that to the behavior of the Lannisters, when they exterminate Robert Baratheon's bastards.

And we are to believe that the Walkers are villains? Nay. Nay I say. #TeamWhiteWalkers