This is the greatest story in the history of Daily Kos stories: Turns out that Obamacare is making one of the site's user's health care premiums go up! And that he isn't able to keep the coverage he had before because it's illegal! Weird. I wonder who could have told him that would happen…

Anyhoo, the Kos Kids are not happy. Doesn't "Tirge Caps" (if that even is his real name) understand that this is all better for him? Is he so stupid that he doesn't grok how much healthier he will be? Oh, he thinks he's fine now. But what if he, like, stubbed his toe and had to pay, gasp, out of pocket to get an x-ray? Tirge Caps isn't alone, natch. There are tons of people who will be losing their coverage and paying more for their premiums. And they're all idiots!

Allow me to present: Five Daily Kos commenters who know your health needs better than you do.

1. The ‘You're Wasting Your Money Already Anyway' Commenter

This Kossack thinks you're an idiot for choosing something with a high deductible. Why throw your money away on something as frivolous as health insurance that makes you pay for something like a checkup?

2. The ‘The Government Needs to Protect You!' Commenter

You chose a health insurance plan with limits on coverage? You silly man. Don't you understand that you need to be protected, by law, and under threat of penalty? No? Well too bad, because you're getting that protection anyway. I'd hate to see something happen to your bank account if you refused the government's offer. 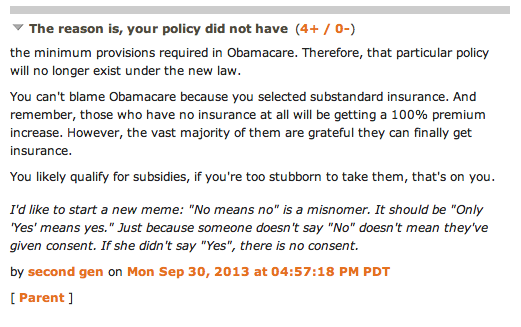 A big fan of Animal House‘s Otter, this commenter mocks you for believing Barack Obama when he told you that if you liked your health insurance you could keep it. Like Flounder, you can't spend your whole life worrying about your mistakes.

4. The ‘Quit Being So Ungrateful!' Commenter

"You wanted to eat at McDonald's but instead I brought you this awesome steak from The Palm … and you're wondering why I'm asking you for way more money?" 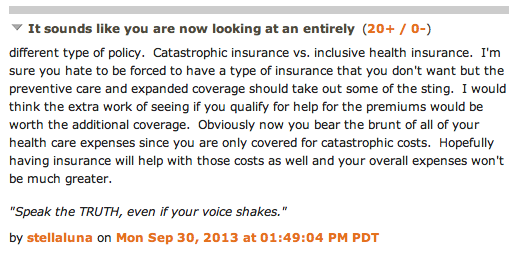 This commenter will explain to you—using words as small as possible—that you don't understand how awesome this plan is because you're so stupid. But once they healthsplain all the benefits to you, you'll surely agree that it's AWESOME.