I don't personally care about spoilers, because, you know, we're adults now. But since this just came out and everyone is so skittish these days, I've constructed this barrier between the pre-game (which you can check out here, in case you haven't yet seen Fast & Furious 6) and the post-game. 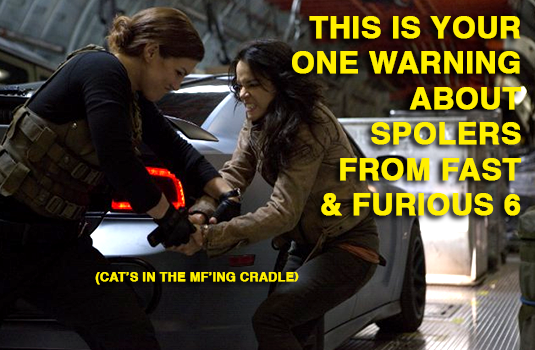 Okay, first off, when you debate Five vs. Six over that cold one, you better bring another to pour out for Han and Gisele, who are more or less the franchise's best characters.

Let that marinate: He's chill, she's a badass, they have actual chemistry and represent the closest depiction of a real human relationship in the series. They also more or less reenact the last scene in Titanic, but with a gun and a car dangling from an airplane like a Christmas ornament.

Here's why Five is better than Six, though: Brian leaves the movie for like 20 minutes to break into prison in Los Angeles for no reason.

Five is more focused, more contained, makes better use of its cooler location, has fewer completely insane scenes (the opening scene and the bridge scene vs. like eight in Six), doesn't drag in the middle, and features one of the all-time inverted heist strategies, where the reveal of the movie is the simple, obvious, hilarious act of just busting the vault out and dragging it through the street.

In Six’s defense, the opening montage is hilarious. The movie just straight waylays all BS. It's like somebody challenged Justin Lin to start the movie in less than three minutes and kill all transitional dialogue. The Brazilian cop basically has a conversation with herself to break up her own relationship. "I've been having a great summer, seeing Europe, having sex, catching up on Scandal. But it's time to go back to routine beat cop work in the slums of Rio." Mia tells the father of her baby to chase down a terrorist for Letty, whose real contribution to this series was that great cross Dom and the Brazilian cop both wear. 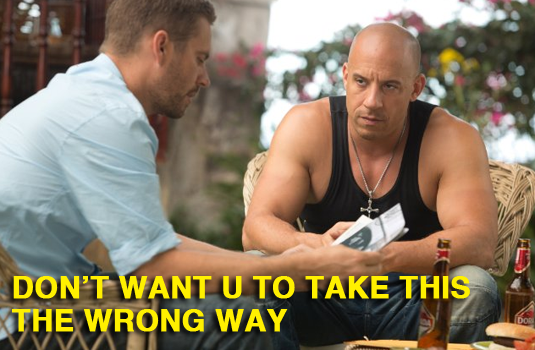 But isn't the absence of wet blanket sports movie girlfriends one of the things that makes these movies great? Letty is really not worth the trouble, and Mia is sort of inessential, but every female character that's not a prestigious car dancer is: extremely competent, physically capable, at least a passable driver, generally has sense of humor, and isn't a drag on the action. Strong female characters, diversity, cars shooting through the noses of airplanes—there’s something for everybody in the Fast franchise. And that’s not even a joke. I love these movies.

2. Han and Gisele are the best characters? Is this amateur hour?

We really mulled this over at the office, and the Fast and Furious value-added rankings look something like this:

We put a lot of thought into this, so please feel free to holler at me about it @katherinemiller.

As an aside, I was pretty frosted the funny guys who spoke Spanish in 4 and 5 weren't back—they blew up an entire road in the Canary Islands with a tank, and they couldn't pay those two guys??—but as it turns out they were played by Don Omar and Tego Calderón! (They're Puerto Rican rappers.) That probably only matters to me, but Don Omar is the real deal. Remember the song at the end of Fast Five? That's Don Omar!

3. Which is more insane: Dom leaping from a moving car on one side of a bridge, tackling Michelle Rodriguez midair, and landing on a second moving car on the other side of the bridge without either sustaining any apparent injuries, or a NATO commander giving up what sounds like a WMD worth billions for Mia Toretto?

This is sort of doing laps in the bell jar, but I think it’s the second. I have nothing against Mia (she just wanted to buy those groceries at night in a bad part of town!), but she is wanted for instigating a massive criminal jailbreak and living off millions in stolen drug money. The Rock should not be pulling a weapon on a NATO commander anyway, but especially in light of Mia's situation, Dom's crew's track record against Shaw, and the implications of that weapon in a post-9/11 world. On the other hand, Dom should be dead. It's a tough call.

4. Can you just run through some of the great things that happened to archive them on the Free Beacon?

Of course. Great moments that happen in Fast & Furious 6:

5. How f—ing awesome is the seventh movie going to be?

The Jason Statham reveal is the best scene of the movie. If it weren’t illegal, I’d upload a pirated version of the credits scene set to Vanessa Williams’ 'Save the Best for Last." The truly nuts thing about this franchise: We’re seven deep and one of the top five working action stars shows up as the villain.

After careful consideration, this chart was prepared by the Free Beacon research department: 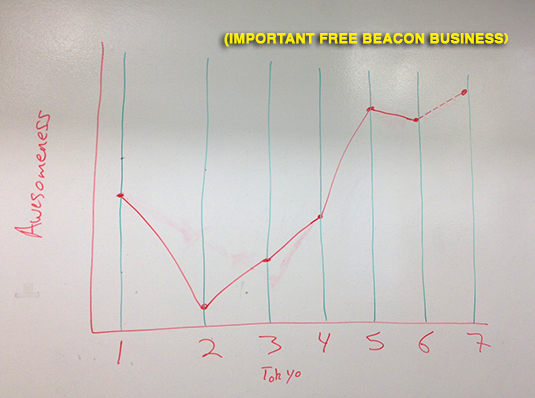 There is a huge asterisk with the seventh, though. Justin Lin isn't directing it (after directing 3 through 6). This could be like the end of Age of Innocence when, recognizing reality cannot meet the expectations produced by our memory, we must walk away into the evening, content in the bittersweetness of unfulfilled promise.

Or it could be awesome.

6. Are you being sarcastic or serious about all of this?

Totally serious. This is America! I like my books complex, but movies should be a good time.

The Rock and Carano, who are both awesome in this movie and have great chemistry, should have their own franchise where they just go around harming people for the U.S. military.

Finally, this photo was on my desktop at work when I was making these: 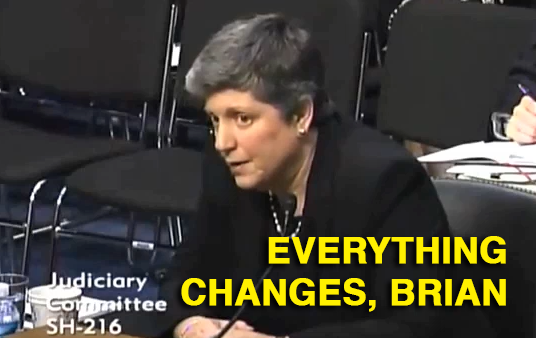