Lacking a coherent agenda, unwilling or unable to defend their signature legislative achievement ahead of the midterm elections in November, Democrats have settled on a new, old strategy: Koch flogging.

Senate Majority Leader Harry Reid (D., Nev.), who seems more unhinged than usual lately as his Democratic majority appears increasingly at risk, has led the charge. Speaking on the Senate floor last week, Reid denounced the septuagenarian cancer-research donors Charles and David Koch as "about as un-American as anyone that I can imagine." We can think of few things more quintessentially American than an elected official using his bully pulpit to accuse private citizens of betraying their country.

That said, we welcome the news, as BuzzFeed reported on Friday, that Democrats are super-committed to this plan of attack:

With the Democratic majority in the Senate on the line and vulnerable House Democrats fretting over Obamacare’s troubles, get ready to hear candidates and committees invoke the Koch name at every opportunity.

The political consultants and strategists of the world are particularly keen. Jim Manley, a former Reid aide turned "Director, Communications Practice" at QGA Public Affairs, sees "no downside to any elected official in this country attacking the Koch brothers," adding: "You always need a foil." Another Democratic strategist agreed, noting that anti-Koch rhetoric is "a rallying cry for the Democratic base."

That’s certainly true. Almost every single one of Senator Kay Hagan’s (D., N.C.) increasingly desperate campaign fundraising emails, for example, includes a reference to the heartless philanthropy barons and their "Koch attacks." (This is not unrelated to the fact that Hagan is increasingly unpopular, and is waging a particularly incoherent campaign.) Meanwhile, the New York Times editorial board is penning frantic fundraising appeals on behalf of Democrats to combat the "right-wing political zeppelin" of the Koch brothers.

What is less clear, however, is the degree to which, you know, actual voters are riled up by images such as this one, courtesy of the left-wing squatter's movement known as "Occupy Wall Street": 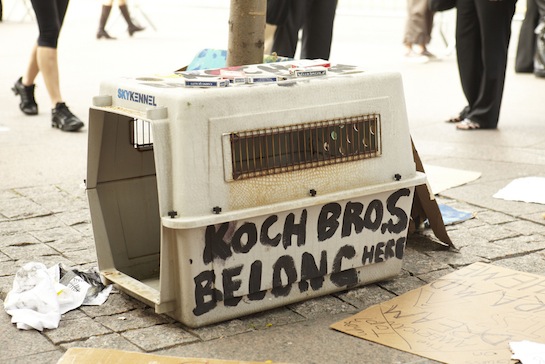 Also unclear is how many voters in November own t-shirts like this one: 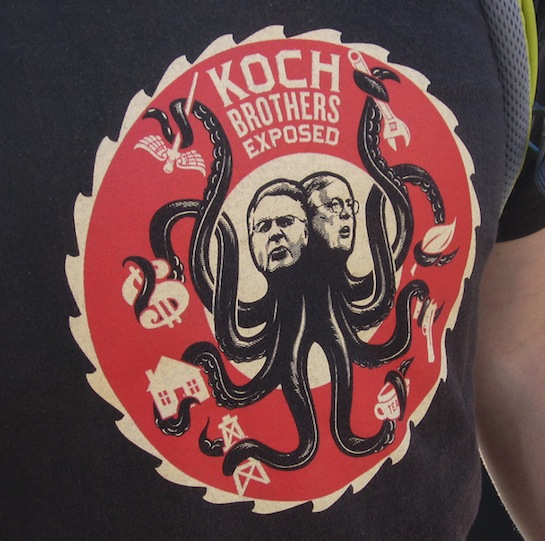 Yet these same Democratic strategist seem confident this line of attack will work with unaffiliated voters, who may not know the correct pronunciation of "Kochtopus."

We’re not convinced. Nor is Newsweek’s Matthew Cooper, who writes that the Democrats’ "reflexive harangues could backfire." For example, their inevitable attempts to cast the Kochs as "anti-gay" or "anti-immigrant" should fall flat given the brothers’ libertarian views.

The Democrats’ Koch obsession also opens them up to charges of hypocrisy, given their unapologetic embrace of left-wing moneymen such as the Steyer brothers and the various billionaires funding liberal Super PACs such as Priorities USA, which makes people like Democratic Senatorial Campaign Committee director Guy Cecil sound awfully silly when he says something like:

"While Republicans can rely on the Koch brothers, we depend almost entirely on grassroots donors and thousands of generous people from around the country to make sure that we have a senate that works for the middle class."

But being silly has never stopped liberals from trying. Nor will it stop Democrats such as Senator Mark Pryor (D., Ark.) from attacking the "Koch brothers’ reckless agenda" despite receiving at least $25,000 from a Koch-affiliated PAC, including $5,000 in September 2013.

In fact, Koch Industries has already given almost $10,000 to Democratic candidates in 2014.

It’s not as if Democrats haven’t tried this before. The last time Koch-rage reached such hysterical levels was 2010, a year that began with President Obama chastising the Supreme Court justices—in unprecedented fashion—to their faces during his State of the Union address, and then culminated in the most lopsided midterm "shellacking" since 1938.

Back in 2010, despite all the caterwauling from Democrats and the press about "the billionaires bankrolling the Tea Party," the "Tea Party puppetmasters," and the "billionaire brothers who are waging a war against Obama," independent voters were unfazed. In fact, they voted for Republicans by a 55-40 percent margin, in large part due to their dissatisfaction over Obamacare. And that was before the American people found out what was in the law, which currently has an average approval rating of 39 percent.

We are reminded of an old saying about the definition of insanity. So by all means, Democrats, keep paying your fat-cat consultants to advise you on the evils of "money in politics" from the comfort of their "Mediterranean-style getaway in Calistoga." You can rest assured knowing that, come the next shellacking, the consultants' fortunes will remain intact. America—the rapacious tentacles of the treasonous Kochtopodes notwithstanding—will endure.