Things That Amuse Me About Mizzou, in No Particular Order

There's a doings a-transpirin‘ at the University of Missouri (Mizzou, for short). Apparently, some of the students are very upset that the president hasn't been as cognizant of their feelings about a series of racist events on campus as they think he should have been, so they protested and got him fired. The whole thing is quite amusing in a certain, perverse sense. For instance:

Professors celebrating the football program getting an administration official fired

Mizzou's president, Tim Wolfe, probably would've survived if it weren't for the fact that the school's football team said they wouldn't take the field—thereby costing the school a cool million bucks and depriving alums of the only thing they care about. Professors and other academic observers were all quite excited about this bit of class consciousness. As someone who has never particularly cared for or about amateur football, I found it quite funny. I'm old enough to remember when concerned professors were super-duper upset about the fact that meathead jocks and their millionaire coaches had more power on campus than poor, oppressed teaching assistants and assistant professors. Speaking of whom: 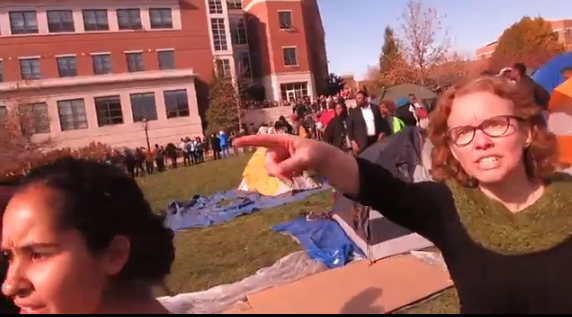 Melissa Click is an assistant professor in the communication program at Mizzou. When she's not conducting groundbreaking research on Fifty Shades of Grey, Melissa Click is demanding that student journalists leave public areas and then, when they refuse, she calls in "muscle" to have them removed.

No, literally. She did that. When a journalist refuses to leave a public space, she screams out "I need some muscle over here." To harass them and get them to leave, by any means necessary. No wonder her crybaby wards are always whinging on about safe spaces.

It's kind of hilarious:

"If you're here to support the students then help keep the press out," a woman just chanted pic.twitter.com/ogA2l5G2xc

Safe spaces as swords? Deeply amusing. Seems like a tactic police officers might want to adopt, no?

Suggesting ‘feelings' trump the right to film in public spaces

If I'm agreeing with Oliver Willis, you know that we are through the looking glass, people:

Seriously, though: The next time a cop tells someone to quit filming them when they're in a public space, he should launch into a lecture about how being captured on film without his permission makes him feel. That should be comedy gold. Also comedy gold?

(Hat tip to Michael Moynihan.) We should definitely interrogate the idea that the press has a right to access public space. That is a Good idea. It is a Good idea because, like, the corporations, man:

If you believe in freedom of the press, you're just playing into the corporate game. Thank God professors are here to open our eyes.