Another day, another tech company lambasted for its lack of diversity. Here's the headline and the lede of CNET's writeup of Yahoo's release of statistics about its workforce:

Yahoo on Tuesday released statistics about its workforce, and the employee makeup is — like many of the other tech firms that have disclosed data — mostly male and mostly white.

Now, one cannot necessarily blame author Richard Nieva for the headline—that's usually the domain of editors, many of whom are terrible—but I feel comfortable pinning that lede on him. And it's remarkably misleading, at least when it comes to race. (Sex is another matter, though I'm shocked, shocked that tech firms are mostly dudes.) Here's the chart Yahoo put together: 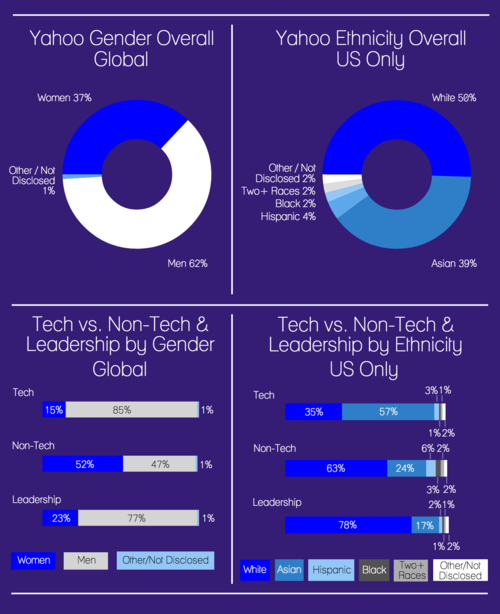 Yahoo's workforce is half-white. That's not "mostly," unless you take "mostly" to mean "the highest single percentage."* But that's a semantic point: the headline/lede are misleading because they want you to think that Yahoo has an abnormally or disproportionately high number of white employees. This is—and I can't stress this enough—total poppycock. Indeed, if we look at the population as a whole, whites are actually underrepresented at Yahoo. Massively so. Non-hispanic whites make up 63 percent of the American population, well more than the 50 percent at Yahoo. Asians, meanwhile, make up about five percent of the general population but 39 percent of Yahoo's workforce.

If my point sounds familiar, it's because I made a very similar one a couple of weeks ago after Google was excoriated by Valleywag** for being "mostly white"—and just two percent black—while completely ignoring the fact that the racial "imbalance" had absolutely nothing to do with whites being overrepresented at the company.

So why does the "mostly white" meme persist about tech companies? I think it's because those who are obsessed with diversity for diversity's sake have a hard time reconciling one very inconvenient truth: If you want to equalize the races—be your concern tech companies or colleges, the two places this argument seems to pop up more than anywhere else***—you must do so at the expense of Asian Americans. Rather than saying "Ugh, these institutions are disproportionately Asian," the diversity set says "Wow, these places are mostly white!" While accurate(ish), this kind of dodges the question, doesn't it? Because it's not so much the proportion of white folks as the proportion of black and hispanic folks that concerns them. It's no fun for the diversifier to say "Geez, we need fewer Asians at these institutions to make way for blacks and hispanics." Forcing them to acknowledge the costs—more blacks and hispanics means fewer Asians, if proportion is all that matters—creates a serious mental tension. That mental tension leads to a mental block. And that mental block leads to the brain spitting out the following formulation: "These companies are mostly white!"

Cognitive dissonance. It's a hell of a drug.

*"Mostly." What does that mean, colloquially? Does it mean a bare majority? Or does it mean a super-majority? If you came up to me and said "Dangit, this bag of Skittles is mostly green," I would imagine that, like, four out of five Skittles you put in my hand out of that bag would be green. Right? Perhaps I'm wrong. Google, what say you? Synonyms: "mainly, for the most part, on the whole, in the main, largely, chiefly, predominantly, principally, primarily." That doesn't suggest to me "50-plus-one percent," right?

**Interestingly, Valleywag wrote up the Yahoo news by noting, "When it comes to race and ethnicity, both companies are about 90 percent White or Asian." This is true, kind of misleading, but way less misleading than calling the company "mostly white." Progress! I'm not going to take credit for influencing their writeup, but it's totes because I shamed them into being less awfully stupid.

***Oddly, we don't have this conversation about NBA franchises very frequently.