Chuck Hagel, Secretary of Progressivism (Not an April Fool’s Joke)

Do you know what your defense secretary is up to these days? Besides calling for a significant reduction in U.S. military strength, republishing his 2008 memoir, and having his calls ignored by the Ukrainian government?

Well, it seems that former "Republican" senator and self-described "American" Chuck Hagel has been reiterating his devotion to the progressive cause. The Wall Street Journal reports [emphasis mine]:

The message reflects an increased effort within the Obama administration to persuade both the U.S. public and other governments that the extreme weather events linked to climate change are putting at risk major swaths of the world's population, even as polling shows most U.S. residents don't see it as an urgent issue.

To be fair, Hagel warned of the dangers of "climate change" in his 2008 memoir: "America: Our Next Chapter: Tough Questions, Straight Answers."

"The specter of ecological collapse through climate change," Hagel wrote, is not a challenge "that can be met and overcome through the imposition of one nation’s will and unrivaled military power."

This may disappoint the more militant factions of the environmentalist movement, but Hagel’s "America" isn’t about pleasing everyone. It’s about promoting bold leadership strategies in a treacherous world.

"All of humanity is in this together," Hagel writes. "Each nation is different." Combating global challenges "will require leadership, patience, understanding, and vision. It is not without risk."

Chief among these challenges, apparently, is combating the risk posed by allowing members of the U.S. military to purchase cigarettes on the ships and bases on which they serve. Stars and Stripes reports:

WASHINGTON — As the Navy considers banning tobacco sales on all bases and ships, Secretary of Defense Chuck Hagel gave a strong endorsement of the review Monday, and suggested that he would be in favor of a ban.

"I don’t know if there’s anybody in America who still thinks that tobacco is good for you," Hagel told reporters at the Pentagon in response to a question about the Navy review. "We don’t allow smoking in any of our government buildings. Restaurants, states, [and] municipalities have pretty clear regulations on this. I think in reviewing any options that we have as to whether we in the military through commissaries [or] PXs sell or continue to sell tobacco is something we need to look at. And we are looking at it. And I think we owe it to our people."

Because heaven forbid our men and women in uniform be allowed the simple pleasure of a cigarette. And why treat our ships and bases and differently than our other "government buildings," especially given the negative effects smoking has on the environment?

I conclude with a particularly moving excerpt from the final chapter in Hagel’s memoir: "It is only to the extent that we citizens are vigilant in its defense, and our leaders both wise and bold in their pursuit, that America can remain ‘the pride of each patriot’s devotion’ and a beacon of hope in a better world." 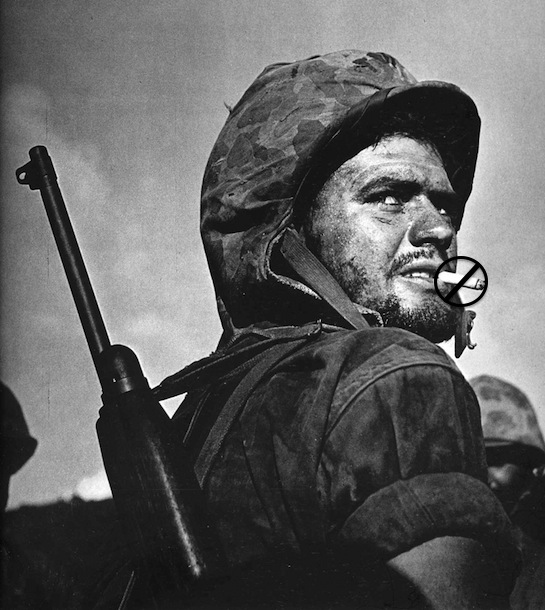 Beacon of hope? Or environmental threat?