Judge Brett Kavanaugh has been accused of attempted rape. His accuser, Palo Alto University professor Christine Blasey Ford, claims that 35 years ago he held her down at a party, covered her mouth, and tried to strip her. The Supreme Court nominee says he never attended any sort of party similar to the one she describes. Whether through an FBI investigation (as Blasey Ford's lawyer has suggested) or Senate hearing (as Kavanaugh backers support), both those claims will inevitably come under further scrutiny.

Unfortunately there isn't much in the way of actual evidence. Blasey Ford apparently made a similar accusation with minor differences in a therapist's session a decade ago, and years later she identified the man in her story as Kavanaugh. She passed a polygraph test, but those are notoriously unreliable, only slightly better than a coin flip per some studies. Both Kavanaugh and Blasey Ford have hosts of friends and colleagues attesting to their moral character.

What it boils down to is the evidence Brett Kavanaugh attempted a rape is that Blasey Ford said he did, and the evidence he did not is that he says he did not. It's the classic "he-said, she-said" situation that frustrates those of us who like nice, clean answers to tricky questions. But to many partisans the issue has been settled: Kavanaugh is guilty, and the burden of proof lies with him to prove that he is not.

The most blatantly stupid of these arguments comes courtesy of ABC's Matthew Dowd, who states that in a he-said, she-said situation, we ought to just automatically believe the woman.

This got a lot of retweets from women who are happy that he is Down With The Cause, but in practice, this is a godawful idea. Dowd is essentially saying that because women were once subject to injustice, we should knowingly engage in that same injustice, this time directed at men. When applied to Kavanaugh that would result in an outcome Dowd no doubt supports, but as a rule it would ruin thousands of innocent lives and incentivize lying as a tool of personal destruction. (One wonders how quickly Dowd would retract his new razor if he were accused of impropriety.)

But there seems to be enough irrationality to go around. Take the letter written in defense of the Kavanaugh accuser by hundreds of women who attended her high school. "We believe Dr. Blasey Ford," the women write. Unlike the letters written in defense of Kavanaugh and Blasey Ford by their friends and students, this letter was open to women who didn't even necessarily know either party and attended the school as late as 2018.

Why then do the women believe Blasey Ford? Well, per the letter, "Dr. Blasey Ford’s experience is all too consistent with stories we heard and lived while attending Holton. Many of us are survivors ourselves." As organizer Sarah Burgess told the HuffPost, "I know that in the coming days, her story will be scrutinized, and she will be accused of lying. However, I grew up hearing stories like hers, and believe her completely."

The reasoning employed here is a bit terrifying; I've suffered or heard stories of women being raped, ergo, I "believe completely" that Brett Kavanaugh held down and attempted to rape a girl at a house party in 1983. It's not so much a leap in logic as it is a transatlantic flight.

There have been similar takes from professional pundits who have gone on the record saying they believe Blasey Ford because it just kinda sounds right. "What you may fail to understand is that for women who were in [high school] in [the] 80s (& even later), it’s credible. Happened all the time," tweeted Jennifer Palmieri.

It's hard not to pick up on the subtext that Dowd made text: thousands of women have been the victims of rape and not heeded. Therefore, in a reparative exercise in collective guilt, we must now believe the woman. The actual facts of the case and the lack of evidence or corroboration must be made secondary to the social justice concerns (and presumably, the political outcomes).

Along with the insinuation that Blasey Ford is beyond reproach for being a woman is the one that Kavanaugh is automatically suspect for being a man. "The only thing less accountable than a powerful white man against a woman’s word is one with a lifetime appointment," writes MSNBC reporter Irin Carmon. "Guess who's perpetuating all of these kinds of actions? It's the men in this country," said Democratic Senator Mazie Hirono. ThinkProgress denounced Kavanaugh's supporters as "a collective effort to protect another influential white man from repercussions," while Salon sneered that Kavanaugh "embodies white male privilege and affluenza… Rich, white male, right-wing Christian."

Likewise, CNN and MSNBC hammered over and over and over again that the Republican Senators expected to question Blasey Ford are all men ("white men" no less, as though that were relevant in a case where the presumed victim and perpetrator are both white). When Republicans floated instead having female staffers or Kavanaugh's female counsel engage in questioning, both arrangements were denounced as sexist and "disgusting."

Even basic scrutiny of Blasey Ford's claims from Republican senators is treated as victim-blaming or close enough to it. When John Cornyn suggested he wanted to know "when it was, where it was, or how it came to be," CNN's Chris Cillizza followed up by tweeting he was "walking a VERY dangerous line here."

All of which leads to the question: if Kavanaugh is actually innocent of this crime, how the hell is he supposed to prove it?

It's difficult enough to prove a negative, that you didn't attack someone. But then there's the fact that it occurred 35 years ago at a party that Kavanaugh claims not to even remember and that the alleged victim is unable to state the location, date, or even the year with certainty. Throw in a social climate that dictates he is automatically suspect for immutable identities outside of his control, that asking clarifying questions is problematic, that the questioners themselves are problematic, that Kavanaugh should be voted down even if the attack is unproven but he was not nice enough to his accuser.

We shouldn't accept Kavanaugh's claim to innocence at face value. But his detractors are embracing a paradigm that would make it virtually impossible for him to be found innocent even if he were. That's a dangerous precedent that rational people of both parties should reject.

‘I Do Not Need a Lecture’: Pelosi Snaps at Reporter Asking About Biden Allegation

Admit It, Sexual Assault Allegations Are More Credible When They’re Against Republicans 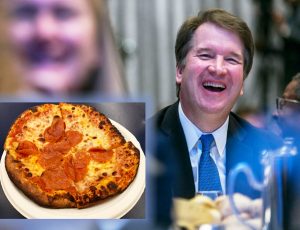