A New Low For Journalism

Nothing matters, everything is meaningless

I honestly can’t tell if this story was intended as parody or some kind of ironic social commentary, because if that's not the case the implications are frightening. 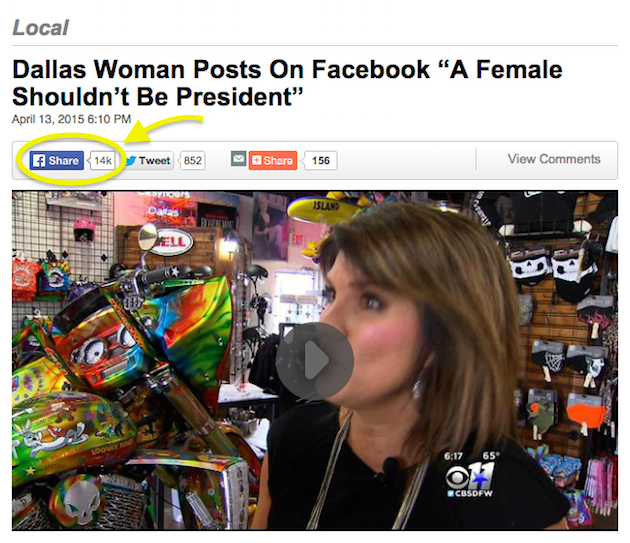 DALLAS (CBSDFW.COM) – "A female shouldn’t be President," is a direct quote from a Dallas woman’s Facebook page.

What is the point of journalism anymore? "Random person says something stupid online" is not even a "dog bites man" story. It’s a "dog defecates in yard" story. Here's the full text of the offending Facebook post, which was written in response to Hillary Clinton's presidential announcement:

If this happens – I am moving to Canada. There is NO need for her as she is not the right person to run our country – but more importantly a female shouldn’t be president. Let the haters begin . . . but with the hormones we have there is no way we should be able to start a war. Yes I run my own business and I love it and I am great at it BUT that is not the same as being the President, that should be left to a man, a good, strong, honorable man.

This local CBS affiliate not only wrote up a story on its website, they actually sent a reporter to interview "Dallas woman" Cheryl Rios and shoot B-roll footage at her workplace. (Spoiler alert: She refused to condemn her stupid Facebook post.) They even interviewed one of her clients, who disagreed with her views.

The story currently has more than 14,000 shares on Facebook. If this is a sign of things to come, the next 18 months are going to be even more excruciating than expected.

One can (somewhat) realistically extrapolate this to the point where Republican presidential candidates are being asked to respond to random commenters on their social media posts: "And now to you, Senator Cruz. Twitter user @h00j_d0ng1776, one of your followers, no less, writes: ‘#HillarySoOld she remembers when women couldn’t vote. Those were the days.’ Senator Cruz, do you think your opposition to female suffrage will hurt you in a general election?"

If your head hasn't exploded by the time you reach the story's epic kicker, it will:

Several people have responded to Rios’ post on Facebook. Some supporting her views and others criticizing them.

The last one isn't even a proper sentence. Nothing matters. Everything is meaningless.