Bass spoke at two Democratic Socialists of America conferences—one on policing in 1988 and another on "socialism and empowerment" in 1993. This comes just one week after the congresswoman denied having socialist or communist sympathies in an NBC interview.

Bass has come under fire in recent weeks—most notably for favorable comments she made about communist dictator Fidel Castro—as presumptive Democratic nominee Joe Biden closes in on a running mate.

In a 2016 statement, the representative said Castro's death was "a great loss" to Cuba—though the dictator was responsible for tens of thousands of deaths during and following the Cuban Revolution.

Bass also praised the Church of Scientology, a controversial organization mired in allegations of financially exploiting its members.

Though he has missed prior deadlines set by his campaign for selecting a running mate, Biden is expected to announce his vice president by the end of this week. 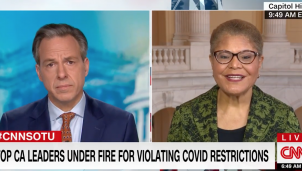