Eighty-eight residents in Pierce County, Washington, received absentee ballots that included return envelopes printed with the wrong names on them due to a printing malfunction.

While the ballots were addressed and sent to the right voters, return envelopes were labeled with the wrong names, the Pierce County auditor's office said Monday. Pierce County auditor Julie Anderson told K5 Seattle the mistake could affect up to 365 absentee ballots, and the auditor's office is now in the process of sending new, corrected ballots to affected residents.

Most of the affected ballots were addressed to out-of-state military voters. Anderson said the vendor contracted to print and mail the ballots attempted to manually correct the printing problem when they should have instead discarded the affected ballots and reprinted them. She insisted that "everybody is going to get to vote, and nobody gets to vote twice."

Requests for mail-in ballots have skyrocketed this year, due in part to health concerns surrounding the coronavirus pandemic. Instances of fraudulent voting and other errors have begun already, with more than a month left until the general election. Roughly a dozen civilian residents in Queens, New York, received mail-in ballots marked for military use. One in four ballots cast in one primary election in Brooklyn were found to be invalid. And on Monday, President Donald Trump called for an investigation into Minnesota Democratic representative Ilhan Omar's campaign for an alleged ballot harvesting scheme. 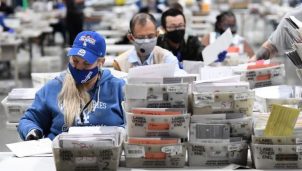