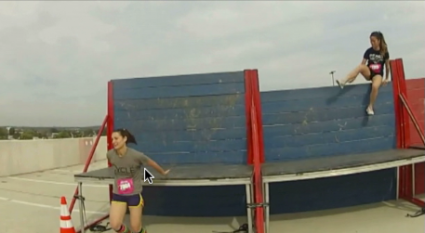 MSNBC’s “The Cycle” has been a stepping stone for its hosts. Despite being only 17 months old, MSNBC’s extremely pale imitation of FNC's “The Five” has had to replace two of its hosts. It's only a matter of time, I think, before another host departs for greater things. Following Steve Kornacki’s banishment to weekends and S.E. Cupp's move to CNN, I would like to predict that soon Krystall Ball's phone will be ringing. On the other end of the line: The producers of “American Gladiators.” Ball ran an obstacle course last weekend. And she dominated. Krystal won't let gender or physical barriers get in her way. And check out those socks.