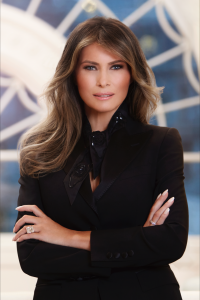 Melania is the second first lady who was born outside of the United States. The first was Louisa Adams, wife of John Quincy Adams, from England. Melania was born in Slovenia and became an American citizen in 2006, after an extensive international modeling career.

Melania married President Donald Trump in 2005. According to her White House biography, she has used her influence in New York City to further her philanthropy.

She was Honorary Chairwoman for Martha Graham Dance Company in April 2005, is an active member of the Police Athletic League which honored her with Woman of The Year 2006, has been an Honorary Chairwoman for The Boy's Club of New York for five consecutive years, and in 2005 The American Red Cross awarded her with Goodwill Ambassador which she has proudly served for four years.  In April of 2008, she was asked by Love Our Children USA and NASDAQ to participate in the Fifth Annual National Love Our Children Day and the beginning of National Child Abuse Prevention month by ringing the closing bell at NASDAQ.  In 2010, Melania was the Chairwoman for The American Heart Association which raised $1.7 Million for research.

The first lady has positioned her platform around cyberbullying amongst American youth, and lives in New York City with her and the president's ten year old son, Barron.