'She has her narrative and she has her experience,' Schneider said

During an appearance on CNN, Schneider told host Dana Bash he agreed with Speaker of the House Nancy Pelosi's (D., Calif.) assessment of BDS as a "bigoted" and "dangerous" ideology.

"So if BDS is bigoted, are those who support it, your colleagues, bigoted?" Bash asked. "Or in this case since cause we're talking about Jews, anti-Semitic?"

"There are a lot of people who support the BDS movement, but may not necessarily understand the intent or the expression of how the BDS movement is actually—what it's fighting for. The fact that it's not just fighting against the occupation of the West Bank or Gaza, it denies Israel's connection to the land going back to 1948," Schneider responded.

"But you said you explained that to your colleague, Rashida Tlaib," Bash pressed.

Bash asked if Schneider agreed with those ascribing anti-Semitism to Tlaib.

"I'm not gonna subscribe it necessarily to the supporters, but the movement itself, its intent and goals are anti-Semitic in intent," Schneider said. "The expression of BDS, what we see on college campuses, the intent to create harassment, hostile environments for supporters of Israel on college campuses, to make it difficult for companies that are doing business with Israel in the United States and around the world, that is by its very nature anti-Semitic. The movement itself has anti-Semitic means, uses anti-Semitic means. That's why it's important tonight that we're going to have more than 75 percent of the House co-sponsoring a resolution condemning the global BDS movement."

Bash asked how he can separate the anti-Semitism of a movement from that of the supporters themselves.

"If somebody supports a movement that you just very clearly laid out you believe has anti-Semitic means and is an anti-Semitic movement, how do you make—how do you disconnect or separate the people who support it from the movement itself?" Bash asked.

"Very simply, the fact that they support this movement, I believe they have an understanding of what they believe the movement does without fully understanding the impact of it," Schneider responded.

Tlaib, a supporter of the BDS movement, suggested during a January debate over anti-BDS legislation that pro-Israel senators "forgot which country they represent." She also expressed support for left-wing professor Marc Lamont Hill, who defended Palestinian violence against Israel and used a phrase often invoked by the terror group Hamas in calling for a "free Palestine from the river to the sea."

A Member of the Anti-Defamation League’s Diversity Council is Embroiled in an Anti-Semitism Scandal. The Anti-Semitism Watchdog Has Nothing to Say About It. 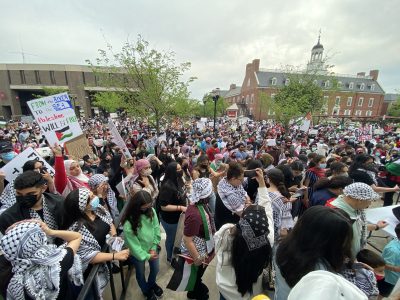