Prominent Liberals Are Losing Their Minds Over the DeVos Confirmation. These Quotes Prove It.

President Donald Trump's pick to lead the Department of Education was confirmed by the Senate on Tuesday afternoon, and as a result, several prominent liberals are losing their minds.

Betsy DeVos was confirmed in a 51-50 vote to be the next secretary of education. Mike Pence was the tie-breaking vote and the first vice president to ever cast a vote in a Cabinet confirmation.

DeVos was a top target for Senate Democrats, who called her unqualified and said she was hostile to public education. Vanity Fair film critic Richard Lawson took it a step further. He tweeted that DeVos' policies would kill children. The tweet has since been deleted, but the Washington Free Beacon was able to get a screenshot of it. 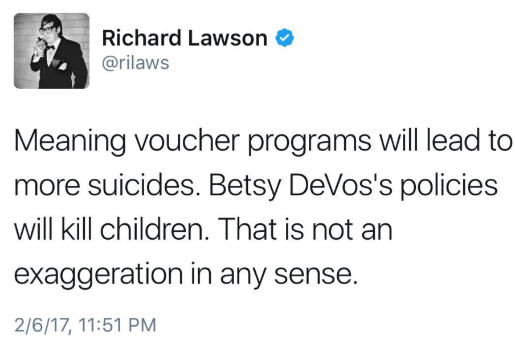 Other prominent liberals took to Twitter to express their outrage and despair.

Betsy DeVos confirmed. What is also confirmed is that there is not one single man of courage in the Republican Congress.

I never ran smooth but I think I'm really broken, I'm sorry, I was funny for a while, good times, please keep fighting

When people teach about the consequences of Trump, if there are still public schools, this will be among the worst. https://t.co/fGNI251asd

Today @VP Mike Pence did something no one else has ever done: cast the tie breaking vote on his own cabinet nominee. #RiggedCabinet

Democrats needed three Republican senators to vote against DeVos in order to derail her nomination. Only two Republicans senators ended up voting no.