Minnesota congressman Keith Ellison cancelled his scheduled appearance the Muslim American Society's annual conference, where he was slated to deliver the keynote address.

Ellison's name and picture, which were previously featured prominently on the convention website's homepage, have been removed completely. He was also removed from the full list of convention speakers.

Ellison was scheduled to deliver the keynote address at the convention's "appreciation dinner" in Chicago on Tuesday.

An updated version of the conference program shows that Ellison's speaking slot has been removed. He was originally scheduled to deliver a 20-minute speech entitled "Our Voice will be Heard."

The dinner was being billed as an opportunity for conference-goers to "Meet the Celebrity!" and get a "one-on-one encounter" with speakers at the event.

Ellison did not respond to numerous requests for comment on the decision to opt out of the event. A representative at the convention said that it could not comment on the change in schedule.

Ellison has a long-standing relationship with the Muslim American Society, which was founded by members of the Muslim Brotherhood to be the extremist group's voice in the United States.

In 2008, the society paid for Ellison to travel to Saudi Arabia for a 16-day religious pilgrimage to Mecca. Ellison was also the keynote speaker for the Minnesota chapter's annual convention in both 2007 and 2008.

Ellison faced criticism for speaking at this year's convention not only due to the radical nature of the Muslim American Society but also because of some of the people he was set to share the stage with.

Among the featured speakers at the convention is Mohammad Ratib Al-Nabulsi, who is scheduled to speak at five different sessions over the course of the three-day conference and has garnered attention for his statements on both homosexuality and Jews.

"Homosexuality leads to the destruction of the homosexual," Nabulsi said. "That is why, brothers, homosexuality carries the death penalty." He went on to complain that America gives "privileges of a wife to a homosexual partner," noting that it was "frightening."

In a brief Nabulsi authored on "martyrdom operations in Palestine" he declared that "all the Jewish people are combatants."

"The wicked Jews are a collection of defects and imperfections, and a hotbed of vices and evils," he wrote. "They are the worst enemies of God, against Islam and its people."

He complained that the "enemy" uses the term "suicide" bombers to deceive Muslims.

"Beware, the enemy calls the operations suicide, they say: suicide operation to deceive Muslims, that this is suicide, but we should call them martyrdom operations," Nabulsi wrote. "A young man in the prime of his years sacrifices his life and shakes an entity."

David Weinberg, a senior fellow at the Foundation for Defense of Democracies, said that no congressmen should be associated with an "extremist" like Nabulsi, especially if they aspire to take a leadership role.

"Nabulsi is an extremist who has incited against LGBT individuals and against the Jewish people," Weinberg said. "He shouldn't be speaking at the same conference as a member of the U.S. Congress, let alone a potential Democratic leader."

Among the other radical speakers at the convention are Abdelfattah Mourou, the founder of the Muslim Brotherhood in Tunisia, Siraj Wahhaj, who was named a co-conspirator to the World Trade Center bombing in 1993, and Osama Abu-Irshaid, who runs American Muslims for Palestine and has called Hamas an "army for liberation."

The Muslim American Society holds it's annual convention together with the Islamic Circle of North America, another group with known ties to the Muslim Brotherhood.

The Anti-Defamation League declared the Muslim American Society to be the "leading American Muslim organization organizing anti-Israel activity in the U.S." 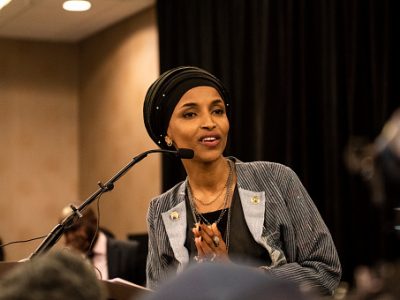 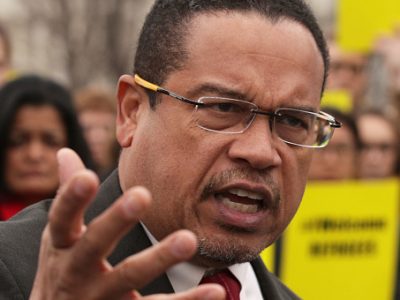