During an Martin Luther King Jr. Day event, Jeffries called the president a "burglar" and alluded to the Klu Klux Klan in calling him a "grand wizard."

Jeffries, the House Democratic Caucus chair, directed the insults at President Donald Trump as he spoke to a crowd of NAACP supporters.

"We have a hater in the White House, a burglar-in-chief, the grand wizard of 1600 Pennsylvania Avenue," he said at the time, referencing the head position of the white supremacist KKK.

Jeffries defended the comment during an interview with CNN’s Wolf Blitzer several days later. He said that he had never called Trump racist.

In response, CNN anchor Wolf Blitzer asked whether he considered the president a bigot. "Are you suggesting he's a racist?" Blitzer asked.

"No, he's a racial arsonist," Jeffries replied. He said he would not call the president names. "I'm not going to stand here and call him a racist or not," he said at the time.

Jeffries has previously implied Trump was a member of the KKK but declined to call him racist. In a CNN interview, he said the president's subdued response to the white supremacist attack in Charlottesville, Virginia suggested to many that "the president of the United States chose to pull the sheets off and reveal himself in terms of his tendency to be a racial arsonist."

Speaking with MSNBC’s Chuck Todd on Sunday, Jeffries again stood by the comment.

"It's colorful language," Jeffries said before turning attention to the president’s behavior "I think the president is going to have to own his pattern of behavior that has taken place, not year after year but decade after decade."

Todd pressed him on his comments. "Do you regret your language?" He asked.

Jeffries was unequivocal that he did not. "I don't regret the use of the language," he replied. "I think we need to move forward."

Jeffries continued, trying to strike a conciliatory tone. "America is a great country: we have come a long way on the question of race," he said. "We still have a long way to go at the end of the day. We're a nation of immigrants. Some voluntary, others involuntary. I think it was Dr. King who said, we all came on the same — different ships but we're in the same boat right now. I think that's the way to proceed."

Jeffries, seen by some in his caucus as insufficiently progressive, weathered a challenge from Rep. Barbara Lee (D., Calif.) for his leadership position. In December, Politico reported that Rep. Alexandria Ocasio-Cortez (D., N.Y.) sought to unseat the high-ranking Democrat. The freshman congresswoman challenged Politico‘s reporting, saying it contained "false information." 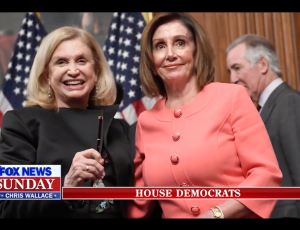 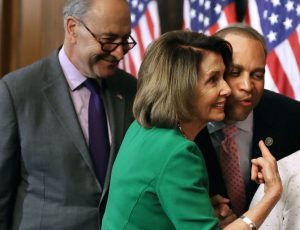 ‘A Coverup’ by ‘Moscow Mitch’: Jeffries Drops the Solemnity on Impeachment