A Democratic candidate for Congress is being mocked for maintaining a residence outside of the state she is running to represent.

LuAnn Bennett, who recently launched a 2016 congressional bid to unseat Rep. Barbara Comstock (R.) in Virginia’s 10th district, was sent a "care package" from the National Republican Congressional Committee (NRCC) Wednesday at her Washington, D.C., apartment. The package included several items intended to help Bennett’s commute from her "home" in Washington to Virginia, such as a map of the state and a Metro SmarTrip card.

Bennett’s $1.35 million condo at the D.C. Ritz-Carlton hotel is located less than a mile from her real estate company, Bennett Group, in the nation’s capital. The congressional candidate has insisted that she has lived in Virginia for 35 years, until recently owning a home in Fauquier County, which is outside the state’s 10th district. That residence is more than 50 miles from her Washington office.

In the face of criticism, Bennett told the Washington Post in December that she had moved from Fauquier County to McLean, which is inside the 10th district, and also insisted that she is renting out her D.C. apartment.

The NRCC’s care package also included a copy of D.C. individual income tax forms and instructions to fill them out, implying that Bennett has evaded paying D.C. income taxes despite owning an apartment there. When questioned earlier this month about whether she has paid Virginia or D.C. income taxes, Bennett said that she has "always" paid Virginia taxes. 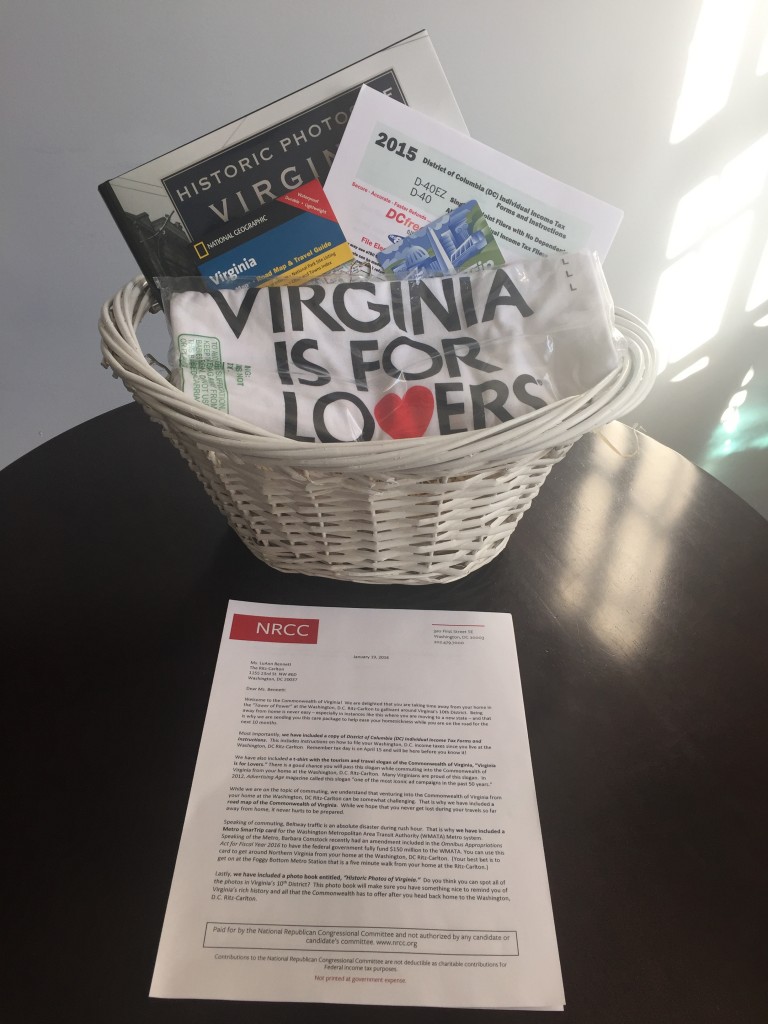 The NRCC also sent Bennett a T-shirt printed with the words "Virginia is for Lovers" and a book of historic Virginia photos.

"We are delighted that you are taking time away from your home in the ‘Tower of Power’ at the Washington, D.C., Ritz-Carlton to gallivant around Virginia’s 10th district," a letter accompanying the package read. "Being away from home is never easy–especially in instances like this where you are moving to a new state–and that is why we are sending you this care package to help ease your homesickness while you are on the road for the next 10 months."

Bennett is the ex-wife of former Rep. James Moran (D., Va.) and has yet to hold public office. She announced her bid against Comstock, a freshman congresswoman, in December.