Ashford, who formerly represented the 2nd District before being defeated during the 2016 election cycle, was trying to take back his old seat but suffered a surprising defeat to Kara Eastman, the president and CEO of nonprofit Omaha Healthy Kids. Ashford positioned himself as a moderate voice and in January was added to the DCCC's highly competitive "Red to Blue" program, which is aimed at unseating Republican lawmakers in districts across the country.

Eastman, who received over 51 percent of the vote, is a political newcomer and ran her campaign as a progressive voice looking for change, touting her support for policies like "Medicare for all" and repealing the tax reform law President Donald Trump signed in December. Her stance on abortion was also to the left of Ashford’s.

She took the podium Tuesday night to declare victory as the crowd chanted, "Washington! Washington!" the Wichita Eagle reports.

"I am very humbled and honored to accept the Democratic nomination tonight," Eastman told her supporters, talking about how her mother helped inspire her to run for office.

"Here's the thing — when I win in November," Eastman said as cheering erupted once more, "I will be the first ever Democratic woman elected from this district in Nebraska."

"Far-left progressives are winning the war for the soul of the Democratic Party, and it appears they have their first scalp in former Congressman Brad Ashford," Pandol said. "If these results hold, all of Nancy Pelosi and the DCCC's efforts to put their thumb on the scale couldn't save Ashford – now every establishment Democrat in a contested primary has reason to be very nervous." 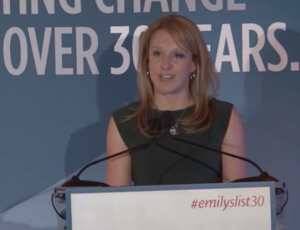