The Republican Party of Florida quickly turned comments made by Charlie Crist over the weekend into an ad that will run statewide in Florida.

The ad highlights Crist's refusal to return $90,000 in donations from strip club owners whose establishments have been investigated for drug dealing and illegal prostitution. It also notes that "a lot of victims" of sex trafficking are strip club dancers.

The head of the Florida GOP, Leslie Dougher, said in a press release, "Crist is all talk and no action, and his empty rhetoric on women’s issues is insulting but not surprising. If Charlie Crist had any shred of decency left, he would immediately return the dirty strip club cash." 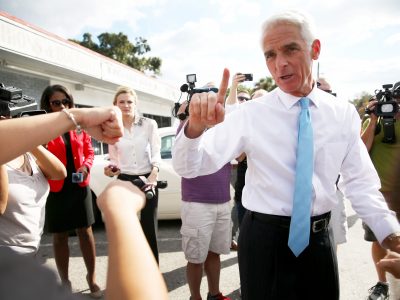