North Korea has deployed an indigenous unmanned aerial vehicle capable of attacking ground targets based on stolen U.S. target drones, the Pentagon revealed in a report to Congress.

Images of the North Korean drone in flight were shown as part of a March 2013 military drill, the Pentagon report said.

"The drone appeared to be a North Korean copy of a Raytheon MQM-107 Streaker target drone," the report said. "North Korean press coverage of the event described the UAV as being capable of precision strikes by crashing into the target."

The report, "Military and Security Developments Involving the People's Democratic Republic of Korea," is required under 2012 legislation and was made public on Wednesday.

The drone also was shown on a cruise missile simulator that was shot down by a mobile surface-to-air missile.

It was the first official U.S. confirmation that North Korea has joined the ranks of nations developing strike drones.

The United States has the most highly advanced attack drone capabilities, including Predator and Reaper missile-firing remotely piloted aircraft.

China has more than six new drones deployed or in development, including missile-firing aircraft. Russia also is building attack drones.

North Korea’s military, among the largest in the world, remain forward deployed near the demilitarized zone, or DMZ, separating the two Koreas, and "can initiate an attack against the ROK [South Korea] with little or no warning," the report states.

In the event of a conflict in Korea, "the flash to bang in Korea is about a day, and you're going to have a potential for a million people dead in a day," Locklear said, referring to North Korea’s massed forces near the DMZ.

The North Korean drone was first disclosed by South Korean intelligence in February 2012. Several of the Streaker drones were purchased from Syria, where North Korea was building a nuclear facility until they were bombed by Israeli jets in September 2007.

The drones are outfitted with explosives, and several tests had been carried out several years ago.

The Streaker is a target drone first developed in the 1970s and deployed in 1987. The report did not say whether the North Korean drones were converted into remotely piloted strike aircraft.

The report also stated North Korea is continuing to develop nuclear weapons and missiles that can reach the United States.

Despite declining conventional military capabilities, "the North Korean military poses a serious threat to ROK [Republic of Korea], its other neighbors, and U.S. forces in the region," the report says. Republic of Korea is the formal name of South Korea. 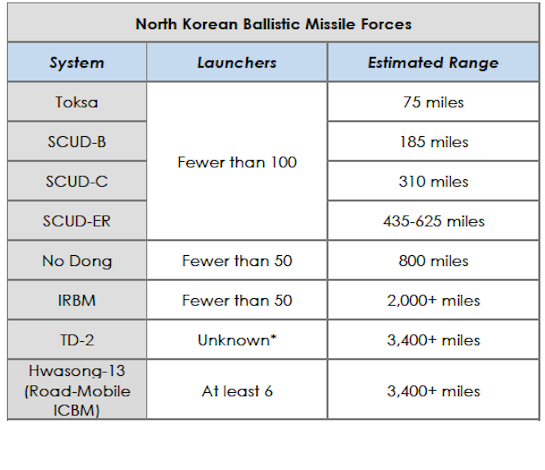 "During heightened tensions on the Korean Peninsula in March 2013, North Korea made the [strategic rocket forces] the focus of its threat to launch a nuclear attack on U.S. and [Republic of Korea] targets," the report said. "The targets included the U.S. mainland, Hawaii, Guam, U.S. bases in the ROK, and the ROK president’s residence."

The six KN-08 missiles, also known as the Hwasong-13, were shown in military parades in 2012 and last year.

The report omitted the fact that the launchers for the mobile ICBMs were exported from China in violation of United Nations sanctions on North Korea. China claimed the launchers were sold as timber haulers and that Pyongyang converted them to missile launchers. Neither country has been sanctioned for the strategic missile transfers.

"If successfully designed and developed, the Hwasong-13 likely would be capable of reaching much of the continental United States, assuming the missiles displayed are generally representative of missiles that will be fielded," the report said, adding that ICBMs are difficult to develop and North Korea’s mobile missiles have not been flight tested.

"Without flight tests, its current reliability as a weapon system would be low," the Pentagon said.

North Korea has at least six KN-08s and unknown number of Taepodong-2 ICBMs that can reach the United States.

North Korea also is building a new 1,200-mile-range intermediate-range missile that has not been tested; as a result the Pentagon assesses its reliability to be low.

The report said North Korean leader Kim Jong Un continued to solidify his hold on power and is using "coercive acts—force or the threat of force—to influence adversaries and achieve policy objectives," the report said.

The goal is to have the regime in Pyongyang accepted internationally as a nuclear weapons state.

The regime announced in April that it is abandoning an earlier promise to denuclearize and would begin a new strategic line of "simultaneous nuclear weapons development and economic improvement."

"His absence will most likely be felt in the economy, as Jang was in charge of several high-profile initiatives, particularly with China, to attract foreign currency and investment to North Korea," the report said, adding that he was a relatively pragmatic adviser to Kim.

North Korea’s strategic goal is the survival of the dynastic Kim Jong Un regime and ideological control over the country.

A recent United Nations report accused the Kim regime of widespread human rights abuses and crimes against humanity, including torture and mass murder.

Relations with China remain a key element of regime survival and North Korea has managed to mute Chinese anger over nuclear and missile tests.

"Although the North Korean regime is aware that China disapproves of its nuclear program and use of coercive actions, the regime likely thinks China is primarily interested in preserving regional stability and will refrain from punishing North Korea too severely or cutting off diplomatic or economic ties," the report said.

Relations with Russia also are friendly but not as close as those with China.

North Korean special operations forces are a major threat and, along with artillery and missile forces, "provide significant capabilities for small-scale attacks that could rapidly spiral into a larger conflict."

North Korea also is developing cyber warfare capabilities and has conducted several malicious cyber attacks since 2009, including cyber attacks against South Korean commercial, government, and military websites that shut them down temporarily.

"One of our gravest concerns about North Korea’s activities in the international arena is its demonstrated willingness to proliferate nuclear technology," the report said.