North Korea is making rapid progress on developing submarine-launched ballistic missiles and missile-firing submarines, according to a report by a United Nations panel of experts.

The report provides new details on Pyongyang's development of a submarine-launched missile called the KN-11.

"The shift from liquid- to a solid-fuel engine for the KN-11 is a major technological development, affording greater stability, quicker preparation and longer fuel storage," the report states.

The report provided photographs of the Gorae-class submarine used to launch the missile.

The development of a missile-firing submarine by North Korea was first disclosed by the Washington Free Beacon in August 2014 amid skepticism among naval experts who said the communist state lacked the advanced technological capabilities needed for such a complex weapon.

Since the disclosure, North Korea conducted numerous ground and land tests at a facility on the east coast called Sinpo.

Sinpo was the site of a failed missile test on Saturday when a liquid-fueled extended range Scud missile blew up shortly after launch. 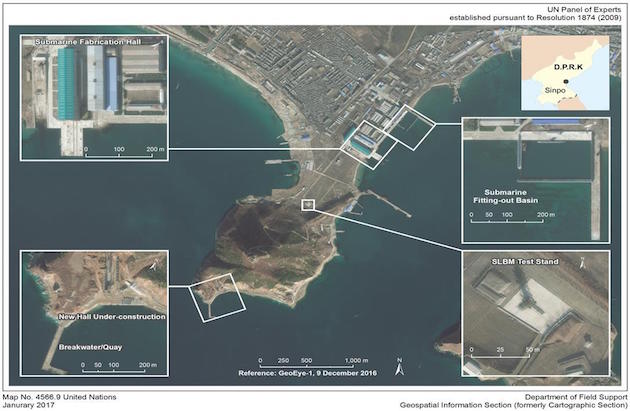 Tensions remain high in the region amid a war of words between Washington and Pyongyang. North Korea has said its missile tests will be carried out weekly. Fiery North Korean rhetoric recently included claims nuclear war could break out at any moment.

The submarine was shown in the report with a modification to its launch platform that helped solve ejection and stability problems.

"To this end, vents were added on either side of the launch tube," the report said. "These improvements are notable given that this vessel will likely serve as the basis for future submarine-launched ballistic missile submarines with multiple tubes."

The sole Gorae submarine uses a single launch tube, an indication the vessel is a prototype.

The KN-11 uses launch techniques similar to the Polaris, first deployed in the 1960s, that follow the sequence of launch, broach through water, ignite the engine, align the missile, and fly toward targets.

A watch list of 60 items that could be used by North Korea for submarine parts was published in December by the South Korean government.

Five tests of the KN-11 were carried out last year, including an ejection test March 16, a failed flight test on April 23, another failure on July 9, and a 300-mile flight test on Aug. 24.

"Four KN-11 tests occurred within five months from the Sinpo area, showing rapid development," the report said. "The test of 24 August, by successfully going through ejection, boost and flight phases, was unprecedented in demonstrating the country’s capabilities with regard to submarine-launched ballistic missiles."

Regarding the April 23 test, images revealed a successful un-ignited ejection of a two-stage KN-11 emerging from the water, the missile igniting just above the surface and then flying for 19 miles.

The report said the April 23 test was significant in identifying the use of solid-fuel propellant and comparing the exhaust plume with a similar liquid-fuel missile test on May 8, 2015.

Additionally, North Korea has developed a gas generator that is attached to the bottom of the missile that is used to eject it from the missile tube.

According to the UN experts, the Sinpo shipyard where the submarine-launched missile is being developed is being expanded with a main fabrication hall. "The main hall may be used to construct additional, larger submarines that are capable of carrying more than one submarine-launched ballistic missile," the report said.

A second hall could be used as a future loading and unloading facility for submarine-launched ballistic missiles.

Air Force Gen. John Hyten, commander of the Strategic Command, told the Senate Armed Services Committee in prepared testimony April 4 that while North Korea does not pose an existential threat to the United States "it remains the most dangerous and unpredictable actor in the Pacific region."

"Pyongyang’s evolving ballistic missile and nuclear weapons program underscore the growing threat," Hyten said. "It continues to defy international norms and resolutions, as demonstrated by a number of provocative actions this past year, including their fourth and fifth nuclear tests."

"These developments highlight its commitment to diversify its missile forces and nuclear delivery options, while strengthening missile force survivability," he said.

"North Korea also continues efforts to expand its stockpile of weapons-grade fissile material and has demonstrated its capability and willingness to conduct destructive cyber-attacks against the United States and its allies."

The UN report was led by Hugh Griffiths, the coordinator of a panel of experts that includes members from the United States, Africa, Asia, and Europe. Other members of the panel include Benoit Camguilhem, Dmitry Kiku, Youngwan Kim, Stephanie Kleine-Ahlbrandt , Maiko Takeuchi, Neil Watts and Jiahu Zong.