Islamic State Steps Up Violent Recruitment of Children for Battle

The Islamic State (IS) is stepping up its recruitment and indoctrination of children, who are seen as "central" to the terror group’s strategy to dominate the Middle East and breed a new generation of radical fighters, according to terrorism experts and regional watchdog groups.

IS (also known as ISIL or ISIS) views children—or so-called "cubs of the Islamic State"—as key to its takeover of the Middle East. IS followers routinely use social media to disseminate brutal photos of young jihadist children kicking severed heads down the road or brandishing automatic weapons.

This type of propaganda serves a dual mission: It motivates extremists to join IS’s fight and also serves as a warning to Western powers seeking to downplay the terror group’s successes, according to those tracking the situation. Some fighters on the battlefield are no older then 16 and have been extensively trained in IS military camps.

"Children are central to ISIS," according to the Middle East Media Research Institute (MEMRI), which has been tracking IS-affiliated social media accounts that disseminate materials focused on child jihadists.

Children "are the future generation of the defenders of the caliphate and they will continue its legacy," according to MEMRI. "ISIS children receive military training, both in camps conducted by the organization and individually, with ISIS fighters."

An IS "toddler kicking an unbeliever's head," reads the caption on one photo tweeted by an IS social media account on Twitter. "Woe to you, o unbelievers and apostates from such a generation that got soaked with the love of cutting off the heads and snipping the necks."

IS also touts its "youngest fighters" on Twitter, celebrating their contributions to the radical group’s fight.

A young boy holding a rifle as tall as he is recently became an IS poster-child when he was reportedly "martyred" with his father during a U.S.-led airstrike in Iraq, according to MEMRI. 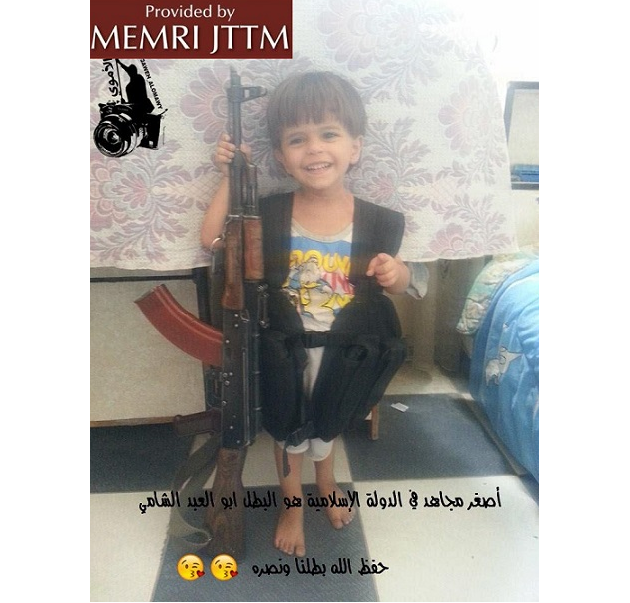 Another child, also purportedly killed in battle, is shown in a military fatigue operating a large automatic rife. 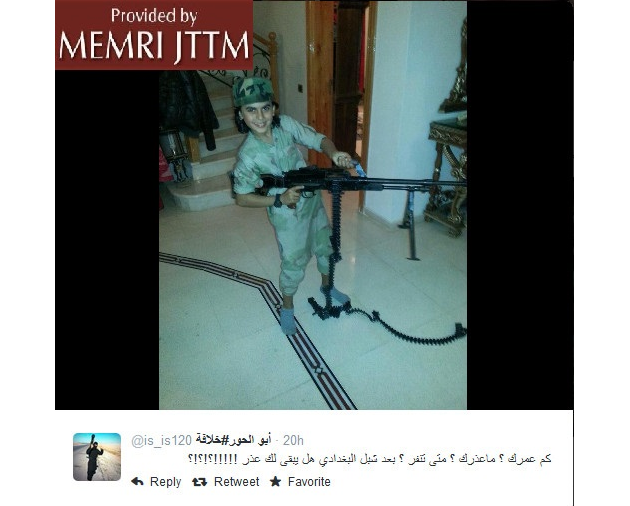 The first photo, dated Oct. 7, shows a child named Abu Ubaida. He is holding a rifle and identified as the "youngest fighter in the Islamic State," according to photos captured by MEMRI from an IS Twitter account.

In addition to children posing with weapons, "photos of children reenacting in play some ISIS atrocities, such as the beheading of American photojournalist James Foley, are also widely shared via social media," MEMRI found.

There is little regard among IS leaders as to whether this type of indoctrination is healthy for children living under its control.

"There is little discussion, in the organization and among its supporters, over whether children should be undergoing military training, or even fighting in actual battles," according to MEMRI.

IS leaders have stated that children under 15 years old are sent to "Sharia camp," where they are indoctrinated in radical Islam. Those over 16-years-old are sent to "military camp," and, once trained, are eligible to fight in Iraq and Syria. 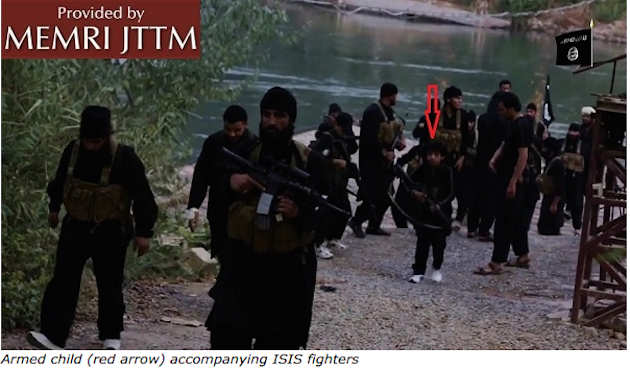 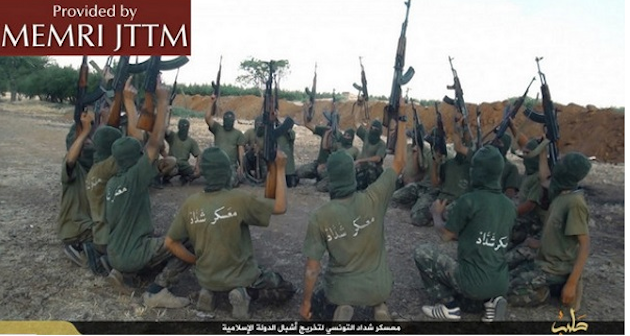 Children also are given "front row seats" to IS’s public execution of those who violate sharia law.

Enforcement of radical Islam—which recently was codified into an IS-authored penal code—"is an integral part of ISIS governance in the areas under its control," according to MEMRI.

IS "has carried out numerous public executions, often documenting them. The executions are attended by children of all ages," MEMRI documents. 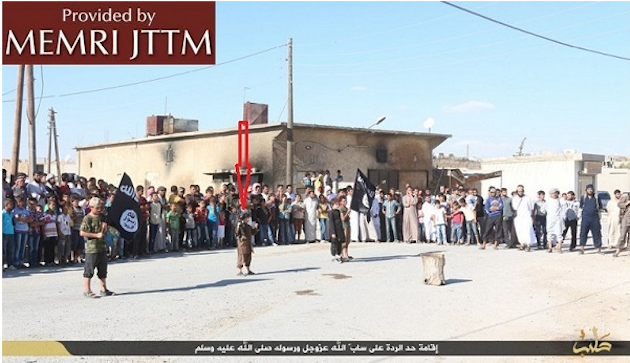 Children also can routinely be spotted in many of IS’s propaganda videos posted on radical websites.

They don military fatigues, fire weapons, chant in favor of IS, and express a desire to destroy America.

The indoctrination can begin at a very young age.

One militant tweeted a photo of her daughter watching the IS propaganda film, Flames of War. 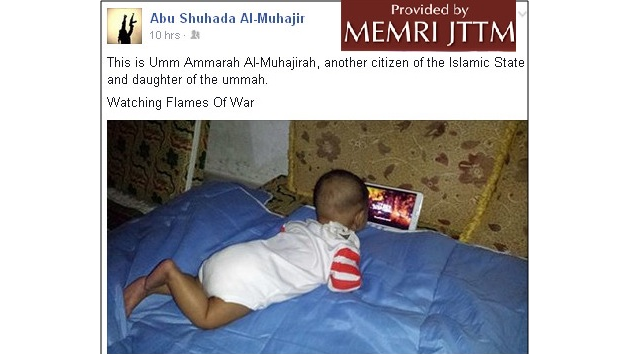 "Children also reenact ISIS activity, such as beheadings of enemies," according to MEMRI.

In August, for example, pictures of a child reenacting the beheading of journalist Foley were posted on a "pro-ISIS Twitter account" belonging to a man identified as Abu Bakr Al-Janabi. 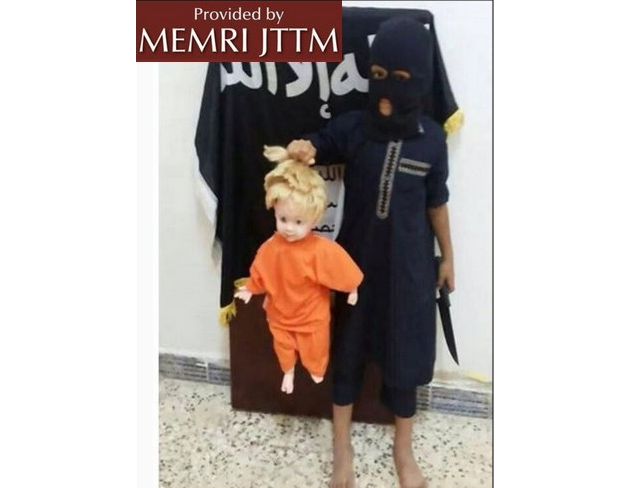 Terrorism experts who spoke to the Washington Free Beacon say that IS is capitalizing on techniques developed by Palestinian terrorists decades ago.

"People can recoil in horror at the targeting of children by ISIS, al-Qaeda, and other terror groups today, but it's really the Palestinians who developed and perfected the technique," according to terrorism analyst and journalist Patrick Poole.

Julie Lenarz, executive director of the Human Security Centre, said that the recruitment of children is "not just a marginal phenomenon."

"The next generation of jihadists include children as young as five, who are brainwashed with images of beheadings, crucifixions, and stoning," Lenarz explained.

While some of these children voluntarily enlist with IS, others "have been abducted and forced" to fight alongside the terror group via a "combination of ice cream and theological indoctrination," according to Lenarz.

These children can be "used in a variety of positions, ranging from domestic responsibilities like cooking, ironing, and cleaning to combat roles, such as suicide bombers, snipers, informants, and guards," she said.

Despite the severity of the problem, the Obama administration has done very little to combat the indoctrination of children, which could pose a large and very dangerous threat down the road, when these children come of age, according to Poole.

"The laissez-faire approach of this administration to the growing threat from radical Islam is going to have catastrophic results far into the future," he explained. "Twenty years from now, how will the U.S. be able to make a pitch about the equality of women in Syria and Iraq, when kids there today are watching Christian and Yazidi women being sold as sexual chattel in the markets with the full justification of Islamic law?"

"We are so far behind in this war, I think it's beyond the comprehension of our media-political class," Poole said.