Guo, a New York-based billionaire and critic of corruption among senior Chinese leaders, said several Twitter accounts he used to reach more than 700,000 followers had been suspended.

Guo spent 28 years as an entrepreneur in China and amassed a fortune from real estate and other ventures. At one time a member of China's economic elite who knew senior political and military leaders, he has begun exposing corruption he witnessed during those years.

Facebook, which has sought unsuccessfully to enter the Chinese social media market, on Sept. 30 blocked pages associated with Guo after receiving a complaint.

A spokeswoman told the New York Times the action was the result of Guo publishing personal information of others without their consent.

The account was prohibited from live-streaming videos for 90 days under YouTube's policy in responding to complaints by issuing a "strike" against users.

The action was taken in response to an unspecified complaint against Guo for alleged harassment.

However, days later, Guo's Chinese-language feed was suspended followed by the suspension of two alternative accounts several days after that.

The dissident was notified six days ago of the suspension in a notice, in both English and Chinese, that stated "we have temporarily limited some of your account features." 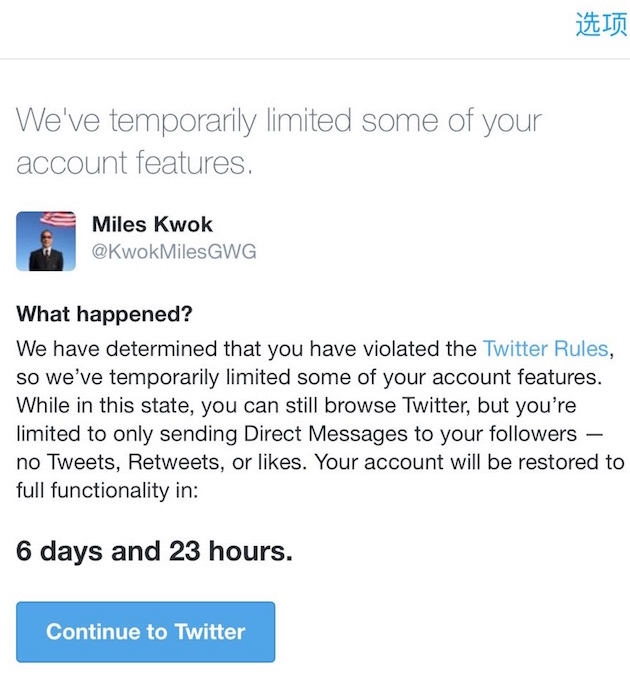 The notice stated that Guo had violated unspecified Twitter rules and as a result his account was suspended for about a week. During the suspension, he was limited to reaching followers only through direct messages–no tweets, retweets, or likes.

Guo said he did not know the reason for the suspension. "I think China pressured them," he told the Washington Free Beacon.

"If U.S. social media firms are doing Beijing’s bidding and censoring the accounts of Guo Wengui, it is the type of servile kowtowing unfitting of American companies whose business model depends on the freedom of expression," Smith said in a statement.

"Facebook, Twitter, and YouTube are all blocked in China, this action will not curry any favors in Beijing and it only extends China’s censorship regime to American soil—silencing a major critic of the Communist Party’s excesses and abuse of power."

The social media silencing of a Beijing critic comes amid a fierce information pressure campaign by China involving a combination of diplomatic and media leverage, along with covert cyber attacks.

In addition to pressing the U.S. government, on social media China has unleashed its government-backed troll army known as the 50 Cent Army–tens of thousands of cyber activists who target critics of the Beijing regime. The name is derived from the trolls being paid the equivalent of 50 cents for each pro-government post.

For example, one of China's notorious trolls engaged in targeting Guo on social media was identified as Wang Yuchu, who uses the Twitter handle @RiuMaZhanJ, translated in English to "war bitch."

Chinese trolls have been attacking Guo and his supporters and have flooded social media companies with complaints about Guo, a campaign that likely contributed to the decisions to restrict his social media account.

The pressure to silence Guo reached a crescendo in the days leading up to the Communist Party of China's major conference this week.

Censorship restrictions in China also were intensified during the Party congress that elected five new members of the Standing Committee of the Politburo, the collective dictatorship that rules China.

The Wall Street Journal reported this week that the State Department blocked the FBI from arresting two senior Chinese security officials earlier this year that were linked to efforts to coerce Guo into returning to China.

"I think it's reflective of institutional culture that has set in within Silicon Valley that seeks to avoid offending communist China and is willing to subordinate free speech," Higgins said.

"Nothing in Guo's whistle blowing is ‘inappropriate' because he only focuses on the corruption of top Chinese officials and their relatives," Yang said. "I believe the Chinese regime is behind all these, and American social media is sacrificing free speech to gain favors from the Chinese Communist regime so that it can access China's market to make money."

Yang said if some content violated rules, "there should be a fair process to allow users to resolve the disputes."

"Such arbitrary suspension of accounts and content restrictions equals censorship," he said. "Today's social media platforms are no longer a private space but a public square. The right to free speech must be protected."

Retired Navy Capt. Jim Fanell, a China specialist, said given Guo's escape from China and request for U.S. political asylum, "it would be a shame for his story to be silenced by U.S. internet institutions."

"These same institutions provide a critical path for the oppressed to tell their stories and represents a beacon of hope for not just Guo Wengui, but for millions of oppressed people around the world, whether in China, North Korea, or Iran," Fanell said.

"This case could have a chilling effect on exposing human rights violations in the PRC," he added. "As such, Guo's story is too important to be suppressed, especially if the suppression is being promoted by the Communist Party of China."