The Girl Scouts buckled under pressure Wednesday to delete a tweet congratulating Amy Coney Barrett for becoming the fifth woman to be confirmed to the Supreme Court.

Leftist commentators criticized the tweet as "divisive" for praising a conservative woman, described it as "really disappointing," and pleaded with the organization not to praise Barrett's accomplishments. Other users said they would boycott the organization's trademark cookie sales because of the "shameful" tweet.

Some on the left thanked the organization once it deleted the tweet, arguing that Barrett does not actually support women and girls.

Even though the offending tweet featured justices appointed by both parties, the organization apologized for the way it seemed to make a "political and partisan statement."

Earlier today, we shared a post highlighting the five women who have been appointed to the Supreme Court. It was quickly viewed as a political and partisan statement which was not our intent and we have removed the post.

"Girl Scouts of the USA is a nonpolitical, nonpartisan organization," the organization said in a follow-up tweet. "We are neither red nor blue, but Girl Scout GREEN. We are here to lift up girls and women."

"Congratulations Amy Coney Barrett on becoming the 5th woman appointed to the Supreme Court since its inception in 1789," the tweet read. 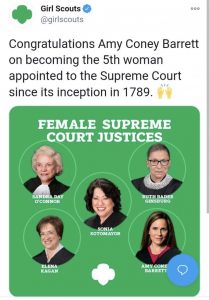 The Senate confirmed Barrett by a 52-48 margin on Monday.