The man at the center of a landmark Supreme Court ruling that struck down major gun-control laws may be back in court to challenge Washington, D.C.'s handling of Second Amendment rights.

Dick Heller, whose lawsuit led the Supreme Court to declare blanket handgun bans unconstitutional, told the Washington Free Beacon that he may sue the city for hindering his right to bear arms in the face of long wait times for purchases.

Heller has been waiting since mid-April for police to process a transfer for a .32 caliber handgun he purchased in Pennsylvania. He accused city authorities of dragging their feet.

"It's a bureaucracy and they're understaffed," Heller told the Free Beacon. "They couldn't care less. They are noticeably not in a hurry."

Residents who wish to purchase guns must go through the Metropolitan Police Department (MPD), the only federally licensed gun dealer in the city—an arrangement unique to the nation's capital. In neighboring Virginia, as with many states across the country, handgun transfers and the background checks that accompany them generally take minutes instead of months. The department told the Free Beacon that record demand was to blame for the delays.

"In less than three months that MPD has been handling this service, the Department has received about half of the guns that the prior Federal Firearms Licensee received in all of 2019," department spokeswoman Alaina Gertz said. "We are currently reexamining processes to try to identify additional efficiencies."

Heller's experience is not unique. Sam, who asked not to be identified for fear of facing backlash at his job on Capitol Hill, said he is still waiting to pick up the pistol he purchased on May 29. Christian, a former schoolteacher and civilian contractor in Afghanistan, has also been unable to retrieve his legally purchased guns after a months-long wait.

As dissatisfied residents pile up and experts question the legality of MPD's unique role as a federally licensed gun dealer, the city may soon face yet another lawsuit over its restrictive gun laws. Heller, who has already filed three lawsuits against the city—including the landmark 2008 case that bears his name—is consulting with lawyers about filing a new suit over the delays.

"They want to spend the money on lazy [staff] instead of giving service to the people that pay taxes," Heller said.

MPD is already nearly booked for handgun-transfer processing appointments through the end of the month. "In the meantime, while most appointment slots in July have been reserved, there are plenty available in August," Gertz said. She declined to comment about whether the agency intended to assign more staff to deal with the backlog. 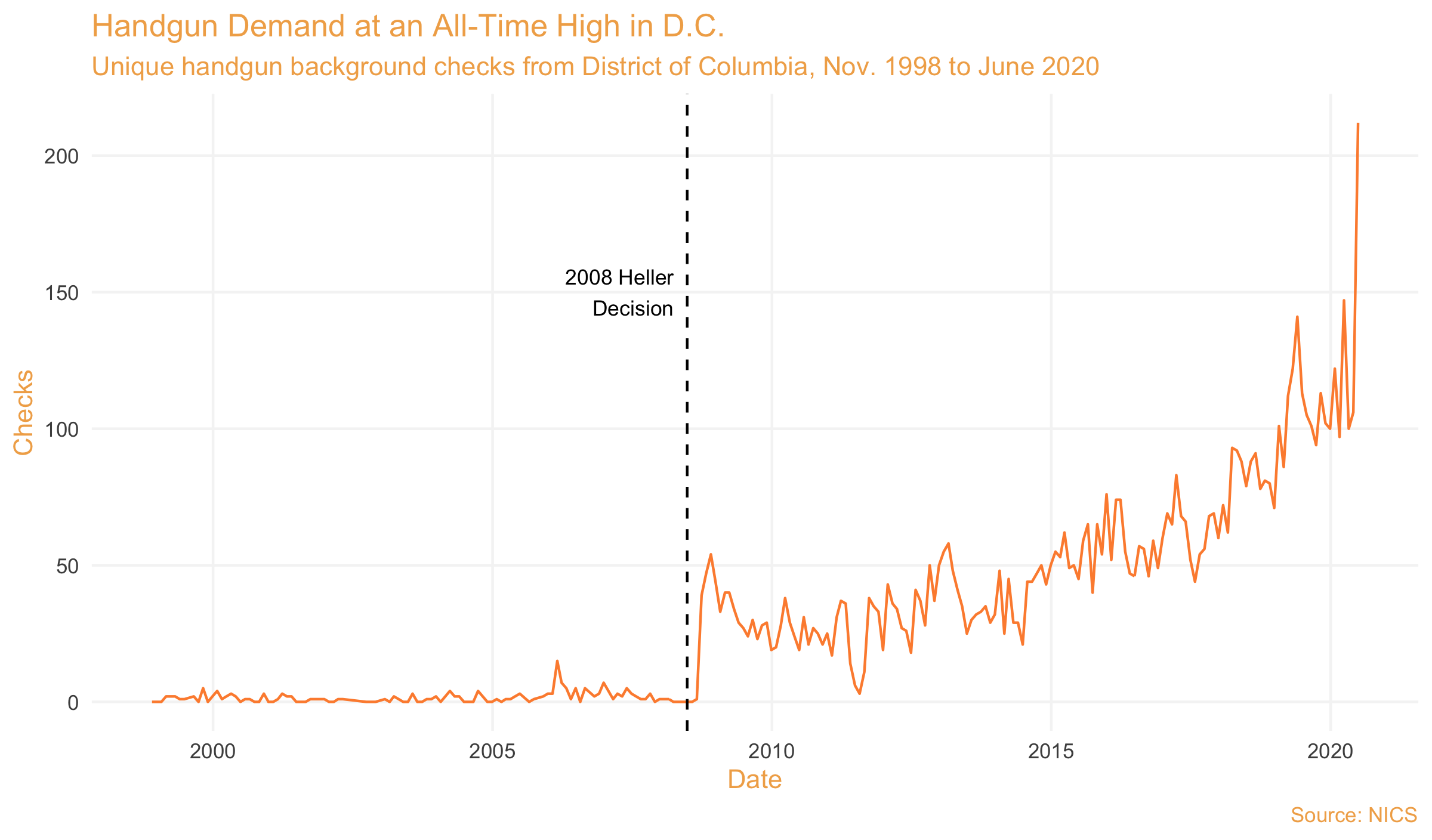 Background checks in D.C. are at all-time highs

Gun transfers were previously handled by a private dealer, but when proprietors shuttered the business, the department assumed responsibility for legally transferring guns purchased outside the city. In the years following the Supreme Court's Heller decision, real estate agent Elby Godwin has transferred a number of weapons through both the private dealer and the police department. After a seven-week wait, Godwin left the police office on Wednesday with a pair of handguns. He is convinced that the department employees did not understand how to handle transfers.

"Many of them don't know what they're doing and are still trying to figure it out. … There's still a lot of people working there that don't know the process in place," Godwin said. "If they'd been responsive from the get-go and had the one-day registration back in place it could have taken half as long."

The office was overflowing with weapons awaiting transfer orders, according to Godwin. He said gun cases fell out of safes as police employees opened them and dozens of others were stacked in shipping boxes inside. Christian also described the scene as chaotic, saying that some MPD staff did not know what paperwork was needed to legally transfer the weapons.

"One of the cops I spoke to when I finally got through seemed to have little clue about the process. As if she were just thrown into something," he said. "I asked about bringing in all the forms. … I had them all printed and mostly filled out. I might [as well] have been speaking in Mandarin to her. She didn't know the form numbers or the process."

Sam, who shared the receipt for his Glock 19 with the Free Beacon, said he feels the system for obtaining a handgun as a D.C. resident is "creating an intentional bottleneck."

"You have to go to this appointment, do the background check, get fingerprinted, pay an additional $170+ for all the fees, then you have to COME BACK LATER," he said in an email. "You actually have to schedule another appointment at some time in the future once your application is ‘approved.' Only then can you take possession of property you have bought months ago."

Heller, whose lawyer sent a letter to Democratic mayor Muriel Bowser demanding a fix to the system at the end of April, said he wants things to change.

"Whatever is required to eliminate what the citizens are calling denial of service through bureaucracy," he said.