The FDA shopped from a menu of aborted fetus organs to insert into lab mice as part of taxpayer-funded experiments, according to government records—a practice that watchdogs said may violate federal law.

From 2012 to 2018, Advanced Bioscience Resources, a nonprofit fetal tissue supplier, charged the FDA $340 per aborted fetus liver and $515 per intact skull. The FDA originally redacted these price listings, but a judge later unsealed the documents containing them, which were made public Tuesday by Judicial Watch. Federal law bans any institution from profiting off the sale of aborted fetuses. Meredith Di Liberto, the lead attorney in the lawsuit to obtain the government records, said the unredacted documents reveal a clear line of business between the FDA and a leading fetal tissue provider.

"I don’t know how you get around that not being a violation of federal law," Di Liberto told the Washington Free Beacon. "Why are they charging per organ? What work is involved that requires you to charge a separate cost for a thymus and a liver?" 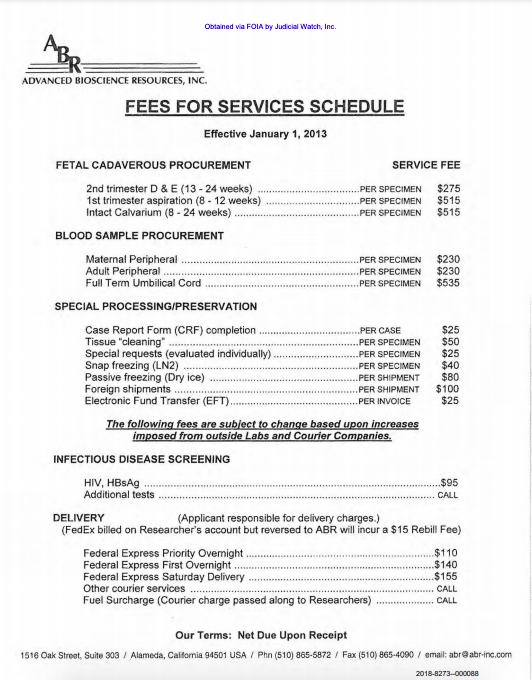 The FDA study established human immune systems in mice with aborted fetus organs to test the effectiveness of pre-approved drugs. Scientists made specific requests to the supplier to keep the harvested organs "fresh" and "shipped on wet ice." The agency defended this research saying such organs were procured when research "couldn’t be feasibly achieved through another means."

"This work has led to a better understanding of a number of conditions and diseases that affect millions of Americans," the agency said in a statement.

The spokesperson did not elaborate on the specific treatments advanced through the research.

The ABR did not respond to a request for comment.

Abortion providers often charge fetal tissue providers the labor cost for harvesting the organs from an aborted fetus, but David Prentice, a professor of molecular genetics at the Catholic University of America, said the listed prices of fetal organs revealed in the contract are "ludicrous."

"Basically you’re trafficking baby body parts using our taxpayer funds, and it’s being done at our federal agencies," Prentice told the Free Beacon. "I think it’s an open question if they’re making a profit off of this tissue, and that obviously borders on the illegal."

The DOJ began an investigation into ABR in 2017 after undercover videos from the Center for Medical Progress showed Planned Parenthood employees negotiating prices and methods of harvesting organs from aborted fetuses. The DOJ declined to comment on the investigation.

Two California medical companies were ordered to permanently close all business operations in a $7.8 million settlement in 2017 after a local district attorney found they were "viewing body parts as a commodity and illegally selling fetal tissues for valuable consideration." David Daleiden, the founder of the Center for Medical Progress, said ABR should be shut down too for similar illegal behavior revealed in its contracts with the FDA.

"The federal court has found probable cause that ABR illegally trafficked baby body parts based on the records publicly available—it's time for these cases to be filed now and for the human trafficking of aborted infants to stop," Daleiden told the Free Beacon.

"It’s sad for science that the Biden administration did away with the ethical review—it moved science backward," Prentice told the Free Beacon. "People’s eyes need to be opened and stomachs need to be churned to know this is going on and demand that it’s stopped. It's antiquated science and medieval research."

The National Institutes of Health gave at least $2.7 million in taxpayer money to the University of Pittsburgh to establish a "pipeline" for fetal research that sought out minority babies. Another study funded by the NIH at the university took the scalps of aborted fetuses and grew them on rats.

Judicial Watch submitted the original FOIA request to the FDA in 2018. Di Liberto said the documents obtained Tuesday is the final information they were seeking after a series of lawsuits over three years. She said the continual refusal from the FDA to provide the requested information despite the termination of the ABR partnership leads her to believe this may not be the only instance of shady fetal organ purchases.

"If you’re the government and you don’t have a relationship with this organization, why are you redacting information unless you are covering up your own role in it? Maybe the problem is that it’s still going on—just not with this contractor," Di Liberto told the Free Beacon.

Update 11:55 a.m.: This piece has been updated with a comment from the FDA.