The publisher of Israel’s leading liberal newspaper responded to the question of whether his country is "evil" by declaring, "the answer is definitely (and sadly) a resounding yes."

Amos Schocken, the longtime publisher of Haaretz, Israel’s leading liberal daily and a popular news source for international journalists, diplomats, and anti-Israel activists, made the statement on Twitter. Schocken said he makes the judgment based on "Israel’s treatment of the refuge seekers," a reference to waves of illegal immigration from Africa that were stopped by the construction of a fence along Israel’s border with Egypt.

The question of whether Israel is an evil country was raised by Schocken's paper, in an article headlined, "Is Israel An Evil Country?" Schocken's statement on Twitter was made in response to several Israeli reporters who criticized the article. 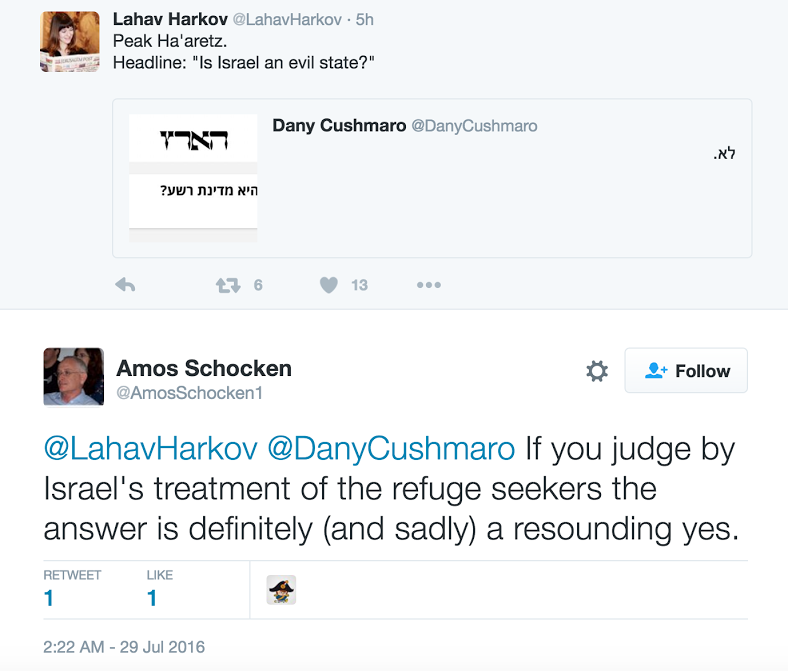 Schocken raised eyebrows in 2013 when he praised Palestinians who had just murdered a four-year-old Israeli girl by throwing rocks at the car she was riding in. "Sometimes, you have to fight violence with violence," he commented.

Haaretz’s circulation in Israel has declined significantly over the past decade amid scandals at the paper, layoffs, buyouts, and budget cuts.

Haaretz’s share of the Israeli print media market fell to 3.9 percent in the latest market poll, its lowest share in history, compared to a 39.7 percent readership for Israel HaYom, the Sheldon Adelson-founded paper, its highest circulation ever. Haaretz has a distribution partnership with the New York Times, another paper experiencing budget cuts, buyouts, and layoffs.