North Carolina Democrat Moe Davis, who lost to Republican congressman Madison Cawthorn in November, accused his former opponent on Monday of being a homegrown terrorist who is worse than the inmates in Guantanamo Bay.

Davis, a former chief prosecutor at Guantanamo Bay, took to Twitter to accuse Cawthorn of being an "American terrorist," claiming that "there’s far more evidence of Congressman Madison Cawthorn’s guilt than there was of guilt for 95+ percent of the detainees" at Gitmo. Attached to the failed candidate's statement were photos of Cawthorne, who is in a wheelchair, speaking to attendees of the Washington, D.C., rally with President Donald Trump that preceded the violent riots at the U.S. Capitol.

"It's time we start a domestic war on sedition by American terrorists," Davis said.

I was Chief Prosecutor at Guantanamo for over 2 years and there’s far more evidence of Congressman Madison Cawthorn’s guilt than there was of guilt for 95+ percent of the detainees. It’s time we start a domestic war on sedition by American terrorists.@CawthornforNC#MadCaw pic.twitter.com/ImbOB3yHVZ

"As a constituent, Mr. Davis is welcome to call our D.C. or district office, where a member of Rep. Cawthorn’s staff will thoughtfully and respectfully listen to his viewpoint," Bock told the Washington Free Beacon.

Davis’s extreme comments on social media were a key issue in his failed campaign to defeat Cawthorn last year. In a 2019 tweet, Davis called for violence against members of the North Carolina Republican Party, suggesting his followers "stomp their scrawny pasty necks."

"Screw they go low, we go high bullsh*t," Davis wrote in a post that was later featured in Republican attack ads against him. "When [North Carolina Republican Party] extremists go low, we stomp their scrawny pasty necks with our heels and once you hear the sound of a crisp snap you grind your heel hard and twist it slowly side to side for good measure."

Davis did not respond to a request for comment. 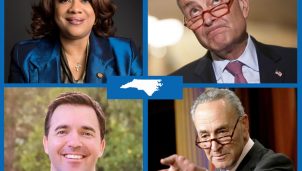