The retail outlet Sears is facing scrutiny for selling a line of t-shirts declaring, "Free Palestine, End the Israeli Occupation," according to offerings listed on the chain's website.

The shirts feature a clenched fist bearing the colors of the Palestinian flag and accuse Israel of waging an occupation of Palestinian lands.

The t-shirts have angered pro-Israel supporters, some of whom have taken to Twitter, Facebook, and other social media sites to express their distaste in the outfits. 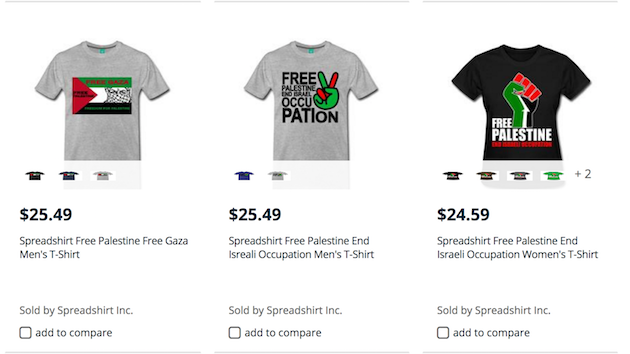 Israel's Voice, a pro-Israel advocacy group, has been urging supporters to call and email Sears to ask for an explanation of why the t-shirts, which they view as anti-Israel, are being sold.

"This is wrong on so many levels. There is a difference between free speech and incitement," the group writes on its website. "This is a subliminal message to kill Israelis and erase Israel from the map. I urge everyone who supports and cares about Israel to call Sears and demand they take it off their line. If they refuse, it is time to boycott Sears, this is not OK and it's dangerous."

Update 3:33 p.m.: Following publication of this report, a Sears spokesman contacted the Washington Free Beacon to announce that the items in question are being removed from the store.

"These items were being sold by a third-party seller via the Sears Marketplace. Given the feedback we’ve received, they are being removed," the spokesman told the Free Beacon.

While the items will not be sold any longer, the Sears spokesman took issue with critics singling out Sears for criticism. Items such as these also are being sold by large retail chains such as Amazon and Walmart, the spokesman said.

"We believe we’re being unfairly singled out on this issue given that these same items are available on Amazon, Walmart.com, and eBay," the spokesman said. "It’s very important to note that we serve a broad base of customers around the country and around the world, and employ people around the world, including nearly 200 in Israel."