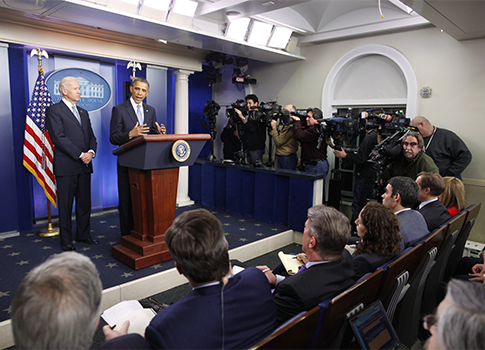 Charging Through the Back Door

Van Hollen: Sequester Was Not Kicked Down the Road

Column: Tax deal is a victory for Hollywood cronyism

My least favorite political cliché—that liberal donors don’t ask for anything in return for campaign contributions—was exposed as laughably false by the Kick the Can Down the Road Act of 2012, also known as the American Taxpayer Relief Act, or the "fiscal cliff deal."

Consider what the bill revealed about Hollywood’s relationship with the Democrats who run the Senate and live in the White House. It is a relationship fraught with denial, in which the gooiest rhetoric obscures the most self-interested acts. For example on May 11, 2012, filmmaker and actor Rob "Meathead" Reiner appeared on "Hardball with Chris Matthews". The previous day Reiner had attended one of several Hollywood fundraisers at which President Barack Obama raised a total of $15 million. Wasn’t it "interesting," Matthews said, that when individuals on "the Republican" side "invest in a Republican candidate, they’re investing in their businesses."

They want a better tax break. They want less regulation. I’m, damn it, in a certain, weird, perverted way, they should get a tax write-off because what they’re doing is for the money!

Whereas "you guys"—by which Matthews meant the good guys, the Hollywood liberals—donate to Obama "for cultural reasons because you share values with the president."

"That’s exactly right," Reiner said. "And it’s interesting. But the Hollywood community is the only donor base, as you call it, that would—that has no quid pro quo."

Yes, it is interesting. It is interesting that Matthews and Reiner were so completely and totally ensconced in their blanket of self-righteousness that they never stopped to consider that "people on Wall Street and the business world, in Texas and around there," might also donate to Republicans because they share Republican cultural values.

It is also interesting—"interesting" is the most overused word on MSNBC—that Matthews and Reiner seemed blissfully unaware that the giant multinational corporations which produce and distribute Hollywood’s "content" around the globe have major financial interests at work in electoral politics.

It is interesting they would be so unaware because in February 2012 Jeffrey Katzenberg, the CEO of DreamWorks Animation and a major donor to Obama and the Obama affiliated Super PAC Priorities USA, was among the guests at a State Department lunch in honor of future Chinese dictator Xi Jinping. Katzenberg lunched with Xi and Vice President Joe Biden in Los Angeles five days later. At the end of Xi’s visit it was announced that Katzenberg and the Chinese government had set up Oriental DreamWorks, a $350 million studio deal to be based in Shanghai, and that U.S. and Chinese officials had agreed to terms by which more American movies could be shown in Chinese theaters.

Both arrangements improved the bottom line of a man who has "invested" upward of $10 million in the campaigns of Obama. Both arrangements were reported in noted media outlets such as the Financial Times and the Washington Post. However, neither arrangement fits into the kindergarten moral cosmology of Matthews and Reiner, in which Republican particles carry negative charges and Democratic particles carry positive ones, and so whatever complications Katzenberg’s moves might have presented to the myth of selfless liberal millionaires and billionaires were simply dismissed.

The sordid details of the fiscal cliff bill are more difficult to ignore. Once again the "only donor base" that "has no quid pro quo" saw its quo multiply nicely. The tax break that allows film and television studios to expense millions of dollars if they operate within the United States costs around $300 million a year. It was set to expire at the end of 2012. However, the efforts of Chris Dodd at the Motion Picture Association of America and of other Hollywood minions ensured that American taxpayers would provide this subsidy to Katzenberg and Spielberg and Clooney and company for at least another two years.

Rich Hollywood Democrats will pay more in taxes as part of this week’s deal, but they also stand to recoup those tax losses, and more, through political maneuvers including Chinese distribution arrangements, subsidies to production, and labor policies benefiting the constellation of unions that occupy the entertainment industry. It does not matter whether you are a Republican donor or a Democratic one: It’s always good to have influential friends.

The Sunlight Foundation Reporting Group has the most comprehensive catalogue of the gifts included in the fiscal cliff bill for Obama’s favorite constituencies. There is the Production Tax Credit, which benefits the alternative energy industry and its liberal benefactors. There is the exemption for New York City bonds, which is intended to help the city recover from a terrorist attack that occurred 11 years ago but which also helped line the pockets of Goldman Sachs and the future members of Democratic administrations employed there. There is a tax credit for maintaining railroad tracks for which BNSF Railway lobbied intensely. BNSF is a subsidiary of Berkshire Hathaway, which is of course the conglomerate operated by the billionaire Democratic donor and oddball Warren Buffett.

All too revealing that well-heeled lobbyists, many of them liberal, are able to secure some $40 billion in tax breaks for connected interests while the elected representatives of the United States of America are unable or unwilling to stop a $100 billion payroll tax increase affecting 160 million people. Such is life in Washington, D.C., in the early twenty-first century, where the superrich divide the spoils under the guise of enlightened morality. Or as Chris Matthews said so well: "What they’re doing is for the money!"

Charging Through the Back Door

Van Hollen: Sequester Was Not Kicked Down the Road