A Virginia school district is prohibiting teachers from consulting parents when students as young as kindergarten-age switch genders at school.

Fairfax County Public Schools is instructing teachers and administrators to forgo parents' permission when a student requests to use a bathroom or locker room associated with his or her so-called gender identity, according to screenshots of a mandatory faculty training module obtained by the Washington Free Beacon. The district will also allow schoolchildren without parental consent to change their names and on its virtual learning portal "identify as male, female, or nonbinary." Teachers could not proceed with the "Supporting Gender-Expansive and Transgender Youth" training until they checked the correct boxes, regardless of their personal beliefs. 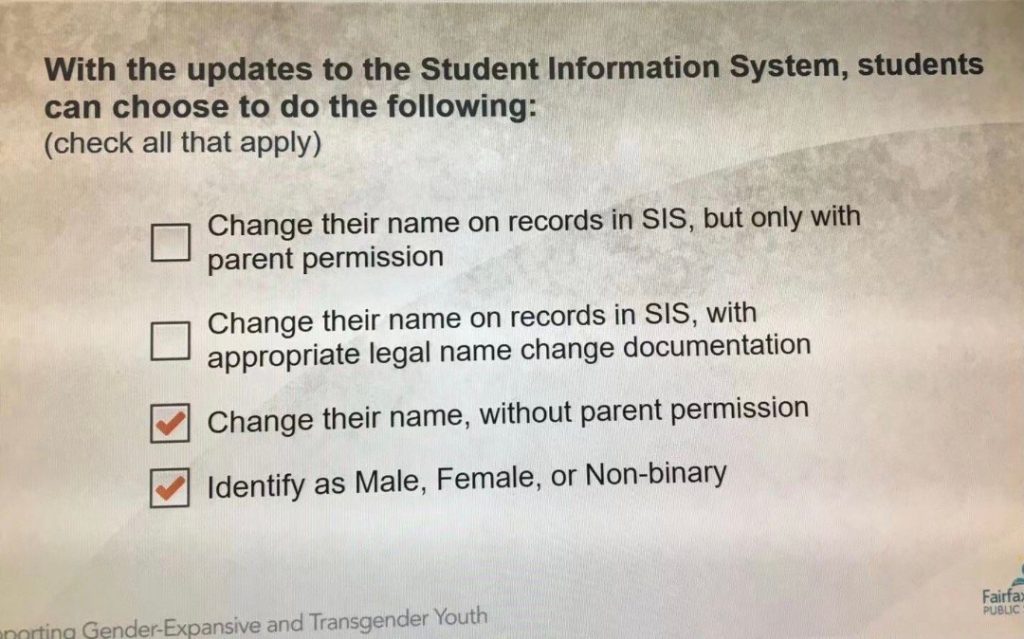 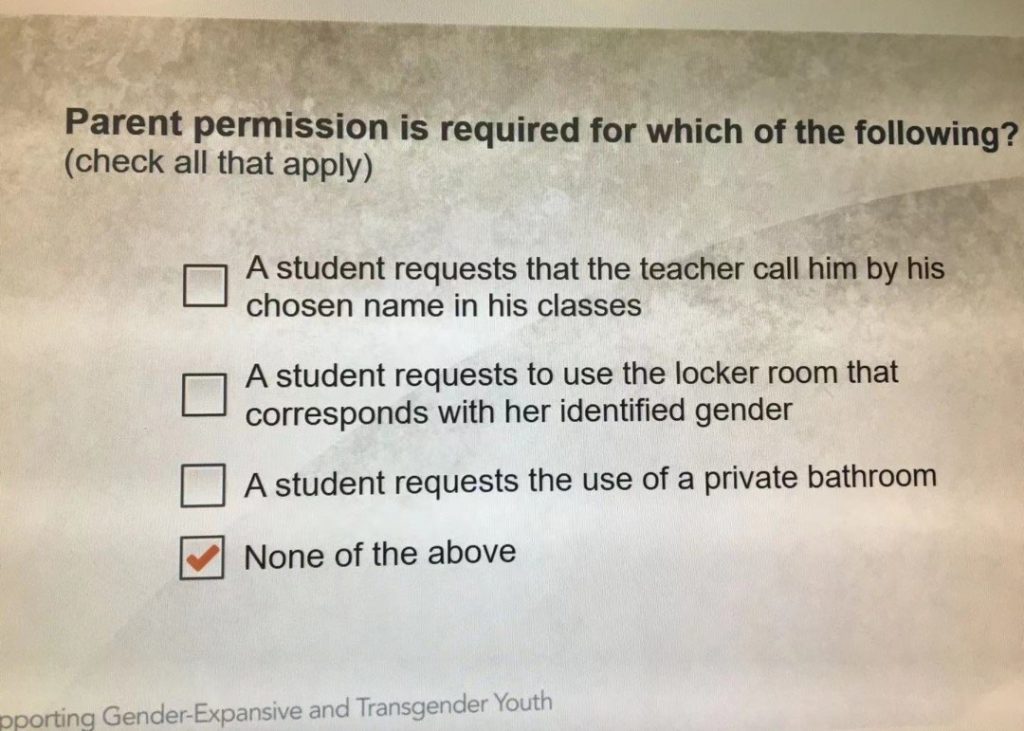 Fairfax County Public Schools did not respond to a request for comment. A county teacher said it was unclear what penalties teachers face for refusing to comply.

The teacher training module is the latest instance in which a public school board has implemented controversial policies without parental consent. A New Jersey public middle school forced students to watch a video about hormone treatment without notifying parents beforehand, the Free Beacon reported in March. Parents have informed the Free Beacon their children "socially transitioned" to another gender at school without their knowledge.

The news comes as parents nationwide have agitated for more oversight of public education. A Fairfax County School Board meeting in June saw dozens of parents turn out to oppose handbook rules that suspend students starting in fourth grade for using the wrong pronouns to refer to gender-nonconforming classmates. The school board adopted the handbook amid parents' objections that the rules violate the First Amendment by compelling speech.

Three parents with children in the school district have formed an ad hoc "shadow board" to monitor and rebut the Fairfax County School Board. Its first meeting, which was held opposite the county school board's own meeting on Thursday, discussed recent lawsuits the district faces for sexual assault accusations, the prospect of sex education becoming co-ed to accommodate transgender students, and pushback by left-leaning education groups after Virginia governor Glenn Youngkin (R.) initiated a tip line to report "divisive practices" in public schools. The Virginia Association of School Superintendents, which is now headed by Fairfax superintendent Scott Brabrand, called in a March 10 letter for the tip line to be "terminated."

Members of the so-called shadow board say the current school board is out of step with parents' demands for quality education for their children.

"It is unconscionable that even with plummeting standardized test scores and record-level teacher vacancies in Fairfax County Public Schools, board members remain hyper-focused on politicizing education," Stephanie Lundquist-Arora, a Fairfax mom of three and shadow board member, told the Free Beacon. "This recent 'gender-inclusive' training, meant to indoctrinate teachers and keep parents from knowing critical information about their own children, is irresponsible and borderline criminal."

Luke Berg, deputy counsel at the Wisconsin Institute for Law and Liberty, told the Free Beacon the teacher training is also unconstitutional.

"Policies like this violate parents’ constitutional right to raise their kids," Berg said. "We are currently suing two Wisconsin school districts over similar policies, and I’m aware of roughly 10 other lawsuits around the country on the same topic, including two in Virginia—one against the Harrisonburg City school district and another against Loudoun County Public Schools."

Republican members of Congress including Sen. Tom Cotton (Ark.) and Rep. Jim Banks (Ind.) have written companion pieces of legislation to stop such policies. The Empower Parents To Protect Their Kids Act, which was introduced in the Senate in October and in the House in June, cuts federal funding for schools that conceal information about students' gender identity from parents or pressure students to go through with a gender transition.

"Schools should never be allowed to impose radical, harmful gender ideology on children—especially without parents’ knowledge and consent," Cotton said.

"Our schools are a place for math and history education, not gender theory indoctrination," Banks said. "No parent should have to worry that their child’s school is enabling, promoting, or facilitating a child’s ‘gender transition’ behind their back."

Fairfax County Public Schools lists hundreds of job vacancies on its website. Pass rates for reading, science, and math students in the county are down by around 10 percent or more as of the 2020-2021 school year, according to Virginia Department of Education data. This year's pass rates have not yet been listed.

"These board members' overt negligence—including the prolonged exclusion of our children from in-person learning—is not a partisan issue, it is a parents' issue," Lundquist-Arora added. "We need to vote them out in November 2023."

Fairfax County's transgender youth training module follows model policies for the treatment of transgender students disseminated in 2020 by Virginia's Department of Education. In that document, school districts were encouraged "to communicate openly" with parents about their child's gender identity, except when those parents do not approve of their child transitioning.

"When a student informs the school about their transition or requests a change to their name and gender, it is recommended that a point-of-contact, or a multi-disciplinary school team if needed, meet with the student (and parents/guardians if the parents/guardians are affirming of the student's gender identity) to develop a plan to accommodate the student's needs and requests," the model policy states. "There are no regulations requiring school staff to notify a parent or guardian of a student's request to affirm their gender identity, and school staff should work with students to help them share the information with their family when they are ready to do so."

The state education department policy supports concealing the students' gender switch at school, citing privacy and safety concerns. "Privacy and confidentiality are critical for transgender students who do not have supportive families," the policy says. "If a student is not ready or able to safely share with their family about their gender identity, this should be respected."