The Department of Defense Declares A War on Weather

Yesterday, speaking at an international confab of defense ministers in Peru, U.S. Secretary of Defense Chuck Hagel unveiled his department’s Climate Change Adaptation Roadmap. A letter from Hagel asserts at the beginning of the Roadmap that:

While scientists are converging toward consensus on future climate projections, uncertainty remains. But this cannot be an excuse for delaying action. Every day, our military deals with global uncertainty. Our planners know that, as military strategist Carl von Clausewitz wrote, "all action must, to a certain extent, be planned in a mere twilight."

Clausewitz, indeed. Side note: This quotation from the great 19th century German theorist of warfare appears to come from the translation of Colonel J.J. Graham, who, sadly, passed away in 1883, his edition having since been superseded by numerous quality 20th century translations.

I like to picture Secretary Hagel composing his introduction to the Roadmap late at night in an elegantly appointed Northern Virginia study, perhaps by a roaring fire—strike that: too much carbon—with a snifter of brandy at hand, suddenly reaching for his dog-eared and much beloved Graham translation of On War. Sure, his aides make gentle fun of this stubborn refusal to consult more contemporary editions—but the old fox is set in his ways.

That, or a twenty-something staffer from Hagel’s office pulled it from Wikipedia. Either way.

But back to climate change. We can all applaud the Department of Defense showing initiative in the face of prospective future threats: the possibility of war with a major power like China or Russia, the prospect of a nuclear Iran, the (likely, it seems) calamity of an Ebola pandemic. It might also help to show initiative in the face of present threats, like the two wars we are currently fighting. Someone in an ungenerous frame of mind might suggest that the threat of global warming—heck of a hurricane season we’re having here on the East Coast, by the way—ranks somewhat lower than these issues.

Let us concede, then, for purposes of present argument, the most dire predictions of the warmists (even if those predictions seem to be taking their own sweet time in coming true) and look at what the DOD is going to do about it.

Well. The Roadmap outlines one of DOD’s two major responses to the problem of climate change—adaptation. (The other response, mitigation, presumably gets its own roadmap.) This plan for DOD adaptation is related to the Strategic Sustainability Performance Plan (SSPP), and sets out three Goals—identifying the effects of climate change, integrating the response to these effects, and collaborating with stakeholders—each of which will be supported by four Lines of Effort. The Roadmap itself is divided into four sections, corresponding to the three Goals (plus a bonus round!) and is driven both by the 2010 and 2014 Quadrennial Defense Reviews and the president’s Executive Orders 13514 and 13653, all of which take very seriously the third National Climate Assessment.

The DOD’s point-man for adaptation will be the Deputy Under Secretary of Defense (Installations and Environment) who will thus also bear the weighty title of Climate Change Adaptation Planning Officer. This officer will co-chair the Senior Sustainability Council (the SSC, which plays no role in elder care) along with the Assistant Secretary of Defense for Operational Energy Plans and Programs. The SSC directs the SSPP and has already established a Climate Change Adaptation Working Group (or, CCAWG) to this end.

Some critics on the left have objected to the fact that the Roadmap, with its focus on adapting the DOD to the reality of climate change, as opposed to mitigating its effects (presumably by converting the military to a green-energy force) is only a token meant for public show, even if a slickly produced one with impressively weighty bureaucratic lingo and a cute picture on its cover of endangered sea turtle hatchlings being released into the Atlantic. Indeed, search the document, and you will find not one use of the words or phrases oil, fossil fuels, alternative energy, or green energy.

Of course, those who are feeling ungenerous about the relative seriousness of the problem of global warming might see this tokenism as a positive phenomenon, even if a costly and wasteful one. They might also see some of the tentative suggestions of problems the military might face because of global warming to be questionable, if not downright silly. The Air Force, we are told, might find surveillance flights harder to conduct because of extreme weather (extreme weather apparently has never been an issue for military aviation in the past). The Marines need to think about how amphibious landings might be affected by rising sea levels (they’ll get to stay on the boat for longer?) and installations in the western United States need to consider what they’ll do with less access to water (because the shortage of water in the West was not at all a problem before global warming.)

The report—it really does look nice, from a graphic design point of view—is illustrated with photographs meant to add dramatic emphasis to the argument. One particularly alarming shot is of flooding at Keesler Air Force Base in Mississippi. No date is given, perhaps because Keesler Air Force Base is next to Biloxi and directly on the Gulf coast, and thus floods every time there is a serious hurricane there, including during Katrina. Hurricanes, we know, only began with the onset of anthropogenic global warming.

The report has a few slightly more credible suggestions, including the need to be more aggressive in the Arctic should sea-lanes open there. Then again, weren’t they supposed to be open by now?

Critics certainly can’t say that the military hasn’t done anything about climate change, however. Check out the back cover: 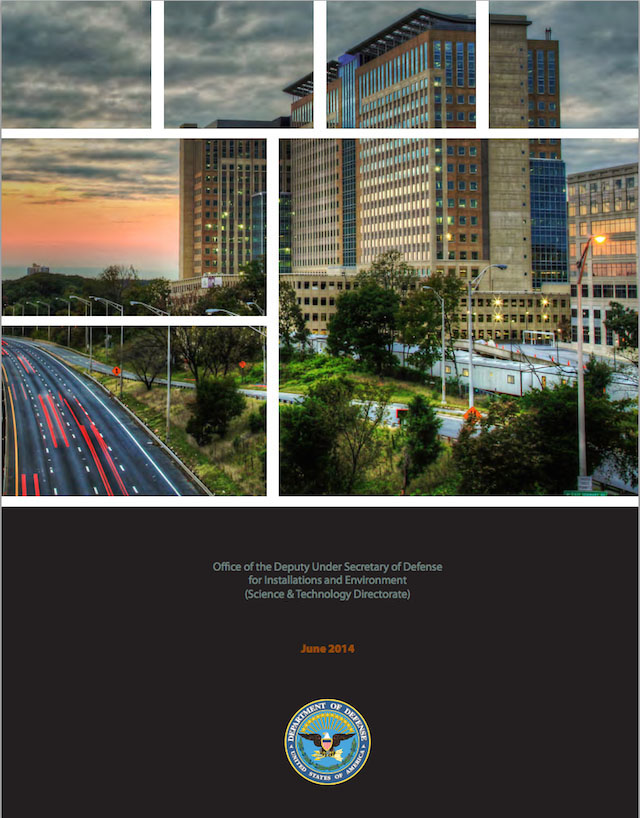 That grand edifice is where the Deputy Under Secretary of Defense (Installations and Environment) battles the weather. If I am not mistaken, the complex is constructed in the post-modern style of architecture, which rejects the brutal structuralism of modernism and reintroduces traditional elements, if only in a spirit of play.

Why, on God’s green (for now) Earth, would defense bureaucrats think that it was in any way appropriate, or even a slightly good idea, to advertise their absurdly palatial, taxpayer-financed office complex on the back cover of this report? Well, the building is "certified by the U.S. Green Building Council for Leadership in Energy and Environmental Design, or LEED Gold."

The defense budget, everyone admits, was under great pressure even before the disaster of sequestration. Things are so bad that credible voices on defense policy have gone so far as to suggest that, even beyond cutting the number of active duty troops, the retirement payments and medical benefits of those who have already risked their lives for their country have to be trimmed. It is not unheard of for married parents serving in the National Guard to be deployed to Afghanistan for so long that their three year old children have been without both parents simultaneously home for more than a third of their lives.

In light of these budgetary pressures, which constitute genuine threats to the national interest—let alone the welfare of the troops—you might be inclined to suggest that the political appointees who chose to construct this building are an out-of-touch, self-congratulatory, and delusional elite blind to the self-serving nature of what they perceive to be entirely noble actions. But that would be ungenerous.