Former Obama administration employee Jon Huntsman made an appearance on MSNBC’s "The Cycle" on Friday, where he was interviewed by his own daughter, Abby Huntsman. Here are five takeaways:

1. Jon Huntsman is a jokester.

"If somebody on the set looks a little bit like me, I'm only 50 percent responsible," Huntsman said when it was Abby’s turn to ask questions. It killed.

Abby wasn’t quite sure what to call her father, so Huntsman chimed in: "You know at home I do insist that you call me ‘your excellency,’ so you may as well just do that."

2. Krystal Ball is a jokester.

But we already knew that. When it was her turn to take a crack at Huntsman, Ball quipped: "I guess I probably shouldn’t call you dad. That might be a little weird." That one killed, too.

She also lumped in Occupy Wall Street (presumably) with other "protest movements cropping up all around the world"—in Iran, Egypt, Ukraine, and elsewhere. This joke wasn’t as well received.

3. Dinners at the Huntsman household are tedious affairs.

After listening to her father ruminate for several minutes on geopolitical "pivot points," "seismic shifts," and economic turmoil in Soviet "buffer states," Abby Huntsman said she felt like she was "sitting at the dinner table at the Huntsman household. This is a lot of what we talked about growing up."

4. Huntsman made a good point about Obama’s lack of "strategy" in Europe.

"One of the things that should be frightfully clear to everybody in the United States watching this play out is that…today we have no strategy at all [in Europe]," Huntsman said. "We have a void in terms of our relationship with Europe. That has to be corrected."

Meanwhile, the Obama administration has called for a sharp reduction in military forces, and Huntsman noted that it was difficult to make funding decisions like that in the absence of a coherent strategic vision.

It didn’t come up on the show, but I found this out after Googling "Jon Huntsman." 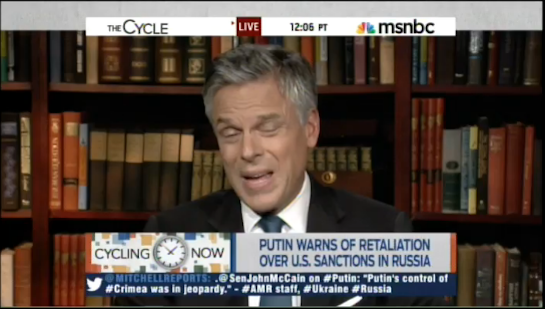