Americans everywhere were outraged last week when some awful, no-doubt-Putin-allied Russian company purchased Pabst Blue Ribbon and National Boehemian (PBR and Natty Boh, for those of you who have never heard their full names). The ghost of Dennis Hopper was hardest hit:

If we're being honest, though, we would note that the Russians are getting into the "Crappy American Beer" market much too late. The time of bland suds has passed. The future is craft beer:

Craft beer makers have experienced huge jumps in market share while the overall beer market size has shrunk. The Census Bureau announced yesterday that the number of breweries in the in the U.S. doubled in five years–an increase largely due to craft beer. On average over the past two years, 1.2 craft breweries opened each day, contributing to a total of 15.6 million barrels of beer last year.

Now, granted, 15.6 million barrels is only a modest portion of the overall beer market. According to the Wall Street Journal article quoted above, craft beers account for just eight percent of the market—an increase of more than 300 percent in 15 years, but a distinct minority of the beer population nevertheless. Still, one can't help but feel that the future is bright for the craft beer community.

As Kyle Peterson writes over at the Federalist, it has taken a while for things to ramp up to this level:

In 1978, Congress and Jimmy Carter officially legalized home brewing, previously a federal crime punishable by prison time, bringing tinkerers and hobbyists aboveboard. The first brewpub since Prohibition opened in Yakima, Washington, in 1982. It was a mad dash to the fermenting tanks from there. Today, somewhere around 3,000 breweries of various sizes operate from sea to shining sea, churning out all manner of hoppy, malty, citrusy concoctions.

Deregulation: Is there anything it can't do?

As Gawker's Adam Weinstein has kindly noted, the Free Beacon is a proud hub of craft beer snobbery. When we're not secretly coordinating (and publicly Instagramming) with pro-Israel senators in their offices, we get the cabal together at joints like Meridian Pint, in D.C.'s Columbia Heights neighborhood, where we enjoy the finest in craft American beers. (I'm partial to the Hardywood Bourbon Cru, myself.) But the greatest thing about the craft beer explosion is that you don't have to go to a restaurant dedicated to craft brews in order to obtain one. Stumble by any decent restaurant and you're bound to find something good on tap. 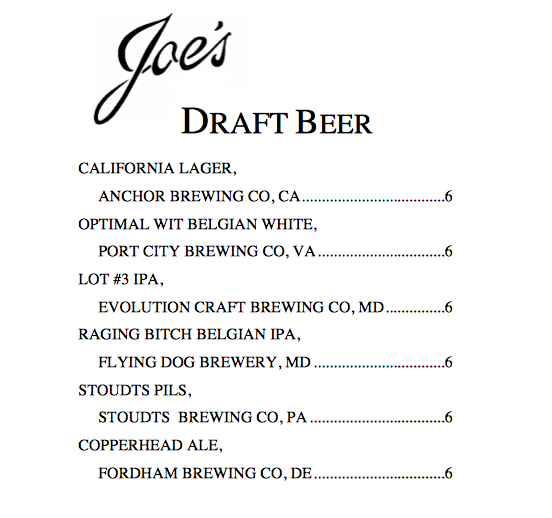 Look at that lineup!

The mass-produced American beers of years gone by have their place, of course, and hey: to each his own. A lot of people still like Bud and Miller, and they should drink what they like. But their time has passed. A new day dawns. A day of tasty craft brews with complex flavor profiles that you can match with a variety of dishes. I for one welcome our craft beer overlords—and am more than happy to let the Russians have our dregs.