Heather Mac Donald is the Thomas W. Smith Fellow at the Manhattan Institute and a contributing editor of City Journal. She is a recipient of the 2005 Bradley Prize. 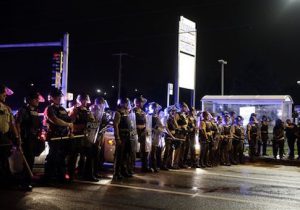 On November 24, 2014, President Obama betrayed the nation. Even as he went on national television to respond to the grand jury’s decision not to indict Officer Darren Wilson for fatally shooting 18-year-old Michael Brown in Ferguson, Missouri, the looting and arson that had followed Brown’s shooting in August were being reprised, destroying businesses and livelihoods over the next several hours. Obama had one job and one job only in his address that day: to defend the workings of the criminal-justice system and the rule of law. Instead, he turned his talk into a primer on police racism and criminal-justice bias. In so doing, he perverted his role as the leader of all Americans and as the country’s most visible symbol of the primacy of the law.