The Harvard-educated doctor was president and CEO of a hospital in Puerto Rico before moving to Orlando to start a private radiology practice. "I grew up in Puerto Rico, and I tell people I know the problems big government creates," Valentin, a Republican running to represent Florida's Seventh Congressional District, told the Washington Free Beacon. "For me it’s personal…. I think the future of the Republican Party is abiding by the principles of limited government."

Valentin is hoping to be part of that future. The first-time candidate won a razor-thin victory in the district's August primary and now has his eyes set on Rep. Stephanie Murphy (D., Fl.). The race is viewed as an uphill battle for Republicans—Murphy, first elected in 2016, prevailed by double-digits in 2018. But before Murphy the seat was held by Republicans for more than two decades, and Valentin believes his real-world experience in the medical field makes him the perfect candidate to win the seat back in 2020.

During the primary, Valentin gained traction by offering expert commentary on the coronavirus pandemic and the response by some local governments, which he saw as "dangerous."

"My biggest criticism of the Democratic Party and my opponent is just like they did in New York, they were proposing central planning policies that can be very dangerous in the wake of a pandemic," Valentin said.

Valentin also recognizes China's role in the coronavirus pandemic and said his opponent misplaced her efforts during the crisis. Valentin—who also has a degree in computer science—believes he has the specialized knowledge to make a difference when it comes to pushing back against China's cyber attacks against the United States.

"This is a virus that came from China," Valentin said. "They had the ability to control it. My opponent, in the middle of a pandemic, was fighting to cut tariffs on China to help them instead of trying to help American workers."

Murphy's record on issues from gun control to abortion do not match the values of the district, Valentin said. The incumbent received endorsements from the pro-gun control Giffords Center and pro-abortion PACs like EMILY’s List and NARAL Pro-Choice America, and in her two terms in Congress has been an ally to groups pushing radical proposals on the issues.

On gun control, Murphy has consistently supported expanding background check laws and called for "restrictions" on the Second Amendment. In fact, her gun-control advocacy as a lawmaker has been so extensive that she was given a central spot in TIME magazine’s "Guns in America Project." On abortion, Murphy cosponsored the Women’s Health Protection Act, which sought to limit the ability of states to put restrictions on abortion.

Valentin argues that Murphy's record on these hot-button issues undermines her ability to present herself as a moderate. "Whether Democrats are using taxpayer funds to promote abortion, or late-term abortion, we’ve seen my opponent really have no limits," he added.

Murphy’s record has galvanized strong support for Valentin from fellow Republicans, including Rep. Steve Scalise (R., La.) and Sen. Ted Cruz (R., Tex.). He is hopeful that support will only increase, and that voters consider his experience as a doctor and CEO.

"I think it's important for me to emphasize my perspective," Valentin told the Free Beacon. "I understand political challenges both as a physician and also as a former CEO. It’s a unique experience and I understand issues from both standpoints of public health and commerce." 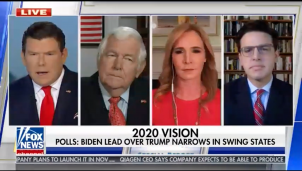