The video by Haley's advocacy group Stand for America highlights Warnock's praise for anti-American preacher Jeremiah Wright, his connection to communist dictator Fidel Castro, and the policies he has supported that are "too radical for Georgia."

Warnock's career has put him in ministry rather than public office, but his record has still given Republicans plenty of ammunition to paint him as far to the left of Georgia voters. His campaign has struggled to answer for his support for anti-Semitic statements, his defense of Wright's infamous "God Damn America" sermon, as well as his statements in favor of government-run health care.

Haley, who was governor of neighboring South Carolina, sent the video to her 719,400 followers Wednesday.

Raphael Warnock is too radical for Georgia and for America. This is what we are fighting against. Watch our new video. #gasen #gapol @standamericanow pic.twitter.com/4nk0rUnfAD

Warnock has evaded questions about many of the topics raised in Stand for America's video. In 1995 he worked for a church that invited Castro to give a speech to its congregation, and he wouldn't answer when CNN's Jake Tapper asked him if he attended. He also dodged a question about whether Wright is an anti-Semite, although the Chicago preacher blamed "them Jews" for driving a wedge between himself and his onetime congregant Barack Obama. 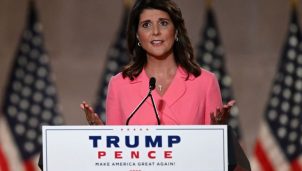