Ashton said she was unable to confirm anything from looking at eye discoloration in a zoomed-in picture of Pence's face.

"What do we know about ocular or eye manifestations in COVID?" she said. "Anywhere from 11-30 percent of COVID patients can have pink eye, it can be an early sign. But George, he can just have some makeup in his eye." 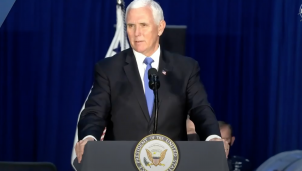