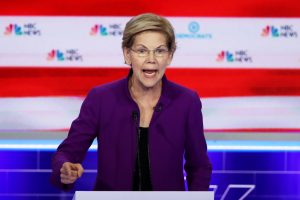 The first Democratic primary debate on Wednesday night included a question directed at all ten candidates on stage as to whether or not they would abolish private health insurance in favor of a government-run alternative. Only two — Sen. Elizabeth Warren (D., Mass.) and Mayor Bill de Blasio — raised their hands.