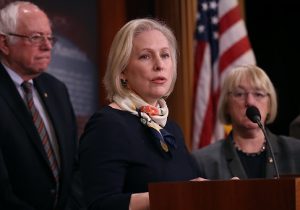 Sen. Kirsten Gellibrand (D., N.Y.) went on a Twitter storm Tuesday against a proposed bill that would make it easier to purchase firearm suppressors, causing the bill's sponsor Rep. Jeff Duncan (R., S.C.) to call her out in his own tweet.