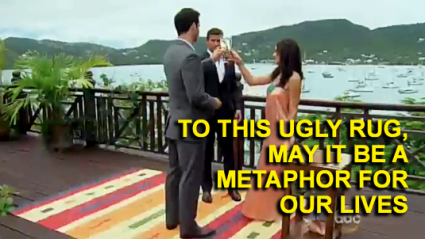 Previously on the Bachelorette: Nearly an entire day of programming. Dez (...the girl), Drew (gel), Chris (tall), and Brooks (gel and tall) went to Antigua. Dez wanted Drew's body. She looked very skeptical about moving to Seattle with Chris. And then for 45 minutes, the Bachelorette producers cut the 7th Heaven soundtrack, and a nation watched as Brooks kicked Dez to the curb. Chris Harrison welcomes us to the LIVE "dramatic" conclusion of the Bachelorette. How Chris Harrison could know a live event will be dramatic is unclear. Anyway, things are pretty bleak at the outset. Chris Harrison informs us that when we last saw Dez, she was heartbroken, alone, crying at the end of a dock, and "virtually hopeless." 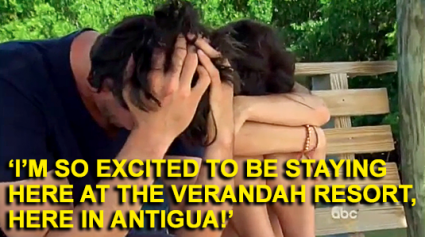 Previously on the Bachelorette: The Men Told All by lying on the floor in a formation that spelled out "I-N-A-N-E." Chris Harrison promised AN EMOTIONAL CONCLUSION. "I'm so excited to be staying here at the Verandah Resort in Antigua," Desiree announces, and I begin to weep gently, because I thought this week's episode was the final one. Well, it isn't. 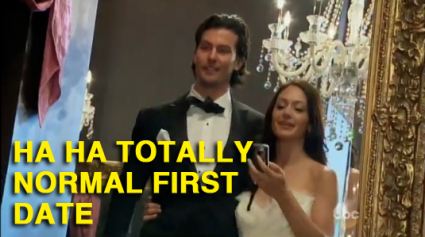 Tonight, we will wake from living the dream real hard: It's the last Bachelorette night in America until 2014! Chris Harrison promised an EMOTIONAL CONCLUSION to these otherwise mildly to moderately dry proceedings. At some point, Dez will weep, "I just want to go home...to be honest." Let's run the table here. She has three options: 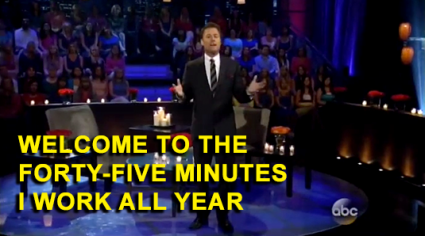 Previously on the Bachelorette: A chiropractor adjusted Desiree; Desiree operated a sno cone truck; Brooks stood up in a canoe; Drew and his father wore subtly matching purple shirts; Desiree sent Zak back to the oil rig. It's the Men Tell All week, and let me tell y'all this: There is not much telling. This is about five minutes of television stretched into two hours. 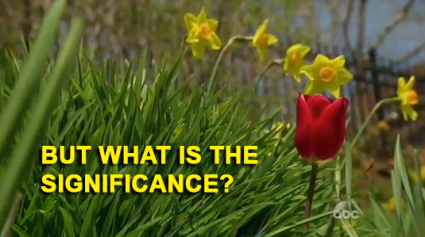 Previously on the Bachelorette: Trapped on an island with five Bachelorette contestants and Desiree Harstock, the residents of Madeira hid indoors; the English language perished; Dez and Brooks sat in the clouds like they were in the dream sequences from Brazil; a federal prosecutor met his fate. Pour yourself a drink—there's a lot to cover this week and, what the hell, you've earned it. The Bachelorette returns stateside for the four family visits and the editing is lean. The setup here is we get a little, tease pre-game date to, I guess, loosen Dez up for the family dinners and parental interrogation. 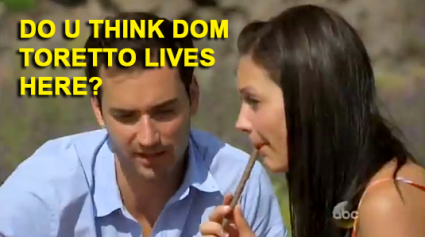 Previously on the Bachelorette: There was a man named James and he may have dreamed of a party on a boat. Adults argued about this in Barcelona. With the amazing stakes magically higher than the incredible ever, the crew heads from Barcelona to Madeira. Despite the show sort of framing it like they just hopped on a yacht and popped over there—because, you know, Europe, it's all close together—Madeira is about 500 miles off the coast of Lisbon, and Lisbon is about 750 miles from Barcelona. One can only hope they took a boat. 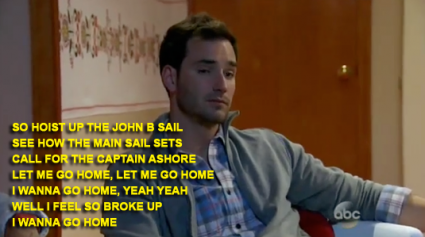 Previously on the Bachelorette: I was in Florida. But, by process of elimination, I have determined that Ben and Mikey were cut. At some point James and Mikey spoke offscreen about what they would do if they were able to escape, and James supposedly said he could become the next Bachelor, or go on a boat party in Chicago. The Bachelorette has swept into Barcelona, which is denoted by the soundtrack's extra emphasis on Spanish guitar. (The Bachelorette always features dental office Spanish guitar. This is the music of amazing, magical love.) 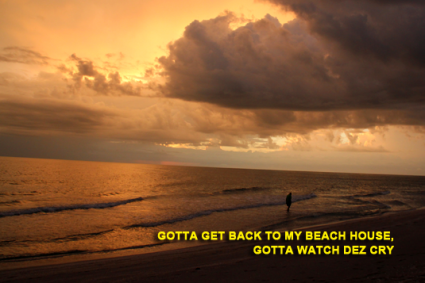 So, bad news. There won't be any Bachelorette recap this week. I am in Florida (seen in the photo above) on vacation. I had originally planned, like usual, to chronicle the timeless yarn of a good woman and the one thing that will always fulfill her: pinning roses on men's chests like the autocratic villain in a dystopian novel. Unfortunately, dinner and some technological constraints intervened. 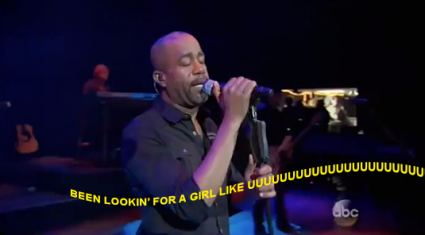 Previously on the Bachelorette: Brooks broke his finger, a woman yelled, the looming specter of Disney's The Lone Ranger loomed, and Dez told an emotional guy that he didn't have to go home, but he also couldn't stay near her. Chris Harrison informs us we're leaving Southern California for New Jersey in the (what looks like) winter! 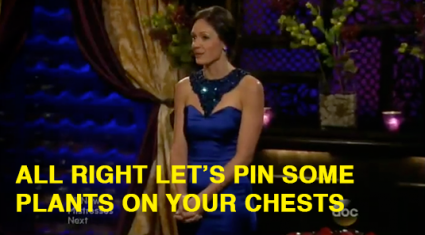 Previously on the Bachelorette: Desiree "Dez Bryant" Harstock actually took someone to a bridal boutique for a first date and humiliated her suitors, America, and, if you can believe it, Soulja Boy, by forcing everyone involved to participate in a rap video called "Right Reasons." It's week two or three (or 18, who knows), and Chris Harrison informs us there will be two group dates and one solo date.
Previous Articles »