Former Rep. Ron Paul (R., Texas) said it was "too early to tell" whether his fervent support for the Kremlin will hurt his son Sen. Rand Paul’s (R., Ky.) potential 2016 presidential candidacy, BuzzFeed reported on Friday:

"I don’t think so, it’s too early to tell," Paul said when asked if his positions on Russia and Vladimir Putin could harm Sen. Rand Paul’s possible presidential campaign. "He’s not even an announced candidate. I don’t think that’s the case."

"Rand speaks very well for himself," Paul said. Rand Paul, while farther to the isolationist side than the other potential 2016 Republican candidates, has made moves away from his father’s positions, reaching out to neoconservatives and presenting himself as more pro-Israel. Meanwhile, Paul has increasingly defended Russian President Vladimir Putin’s position in the Ukraine conflict and blamed the [United States].

Paul defended Vladimir Putin and echoed the Russian government’s line last week suggesting in a column that Ukraine was likely responsible for shooting down the Malaysian airlines flight earlier this month.

The U.S. government says the Russian government was responsible for the attack, which was believed to have been carried out by pro-Russian separatists in eastern Ukraine.

Paul claimed in his column that "neither Russia nor the separatists in eastern Ukraine have anything to gain but everything to lose by shooting down a passenger liner full of civilians."

In Paul’s comments on Friday, he also took a shot against author and foreign policy expert Michael Ledeen, according to BuzzFeed.

"I’m not going to give space on my front page [of my website] to Michael Ledeen to give his side of the viewpoint," Paul said. 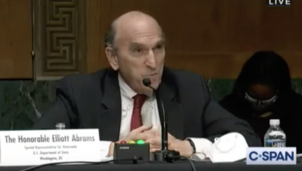