A cartoon published by Politico on Tuesday mocks Texans being rescued from flooding damage as God-obsessed, Confederate Tea Partiers who show insufficient appreciation for the government's assistance.

In the work by left-leaning cartoonist Matt Wuerker, a man with a Confederate flag t-shirt and a Tea Party flag is air-lifted from his flooded home on a helicopter. To complete the unsubtle imagery, the man's home contains a Texas flag reading, "Secede."

He yells, "Angels! Sent by God!" as he is taken to safety, while a disgruntled Coast Guard worker says, "Er, actually Coast Guard … sent by the government." 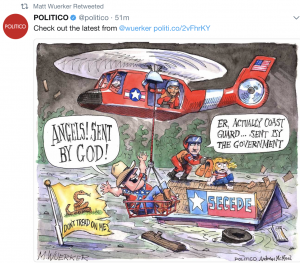 The online response was overwhelmingly negative, with observers saying it was nasty, mean-spirited, and an inaccurate portrayal of Houston, which tends to vote Democratically.

The only ignorance and stupidity I see here is the kind coming out of @politico. Retract and apologize. This is disgusting. @wuerker too. https://t.co/CL5rLs6JIV

Congratulations, you hired the woke equivalent of the Onion's cartoonist pic.twitter.com/jV1IdNOLfi

So, @wueker, apparently you don't know any Christians… or that Houston tends to be pretty liberal?

This is how people like @wuerker at @politico see Texas

No matter people are drowning as we speak, they have to get their stupid insults in pic.twitter.com/s8ob8DP8ju

The very epitome of political bigotry aimed directly at people in peril.

This is pathetic and insensitive to those afflicted by #HurricaneHarvey https://t.co/fAhgv52zEZ

What a miserable message. Shame on him, and you.

Many of the storm victims being rescued from devastating damage to their homes have expressed gratitude to both their rescuers and God.

As the response grew, Wuerker tweeted the cartoon was meant to be a dig at secessionists, not all Texans.

Just trying to point out times like this we're lucky to have rescue services. Don't see how this takes away from private individuals heroism https://t.co/Tk4xCqyV0v

Respectfully— it's making fun of the Secessionist movement. Not at all aimed at all Texans. https://t.co/aI4RxRNjFm

Politico deleted the tweet promoting the cartoon shortly afterward, although it is still up here.

UPDATED 2:12 P.M.: This article was updated with Wuerker's explanation for the cartoon and that the tweet promoting it was deleted.