The new campaign manager for the Democrat challenging New Mexico Gov. Susana Martinez (R.) has a history of derogatory tweets towards women and offensive comments against Republicans.

Verzwyvelt, a native of Louisiana, is a political consultant who has worked on Democratic campaigns across the country for more than a decade. He also owns his own public relations and political consulting firm, Southern Strategic Relations.

The King campaign recently attacked Martinez for "insulting" women after a recent story in Mother Jones reported on secret audio recordings of Martinez and staff, during which Martinez called an opponent "the b-word."

However, King’s own new hire to head his campaign has a long history of publishing offensive comments on Twitter, including calling Republican politicians "douchebags," making derogatory statements towards obese women, and thinly veiled sexual remarks.

"Valentines tip: candy is dandy but liquor is quicker #happyvalentinesday" Verzwyvelt tweeted on Feb. 12, 2012 from the handle @polisav.

"Just got eye banged by a big girl," began another tweet that January. "That’s my signal that’s it’s time to go." 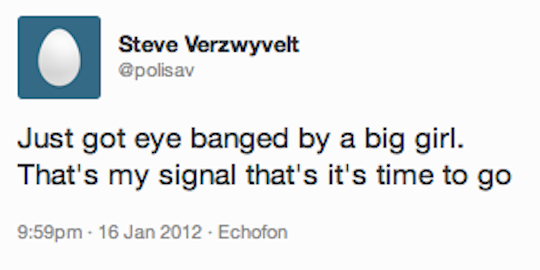 "Fat girls should not wear bikini’s! #spisspringbreak2012" read another on March 11, 2012. He also noted his disdain for "overcooked" women who "put on too much makeup, tanning bed, and have over done hair," in October 2011.

He does enjoy belly dancers and sex toys. "Belly dancers 🙂 for Earth Day" he wrote on April 22, 2012, and added "Joy to the world" as he retweeted a Huffington Post story headlined, "Donate a toy, receive a sex toy" in December 2011. 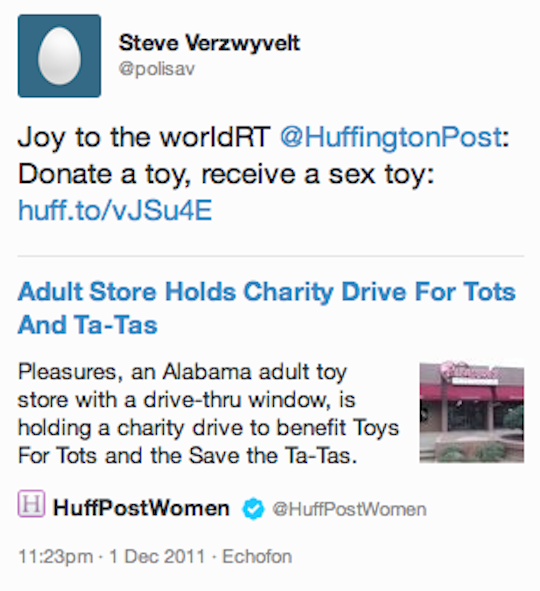 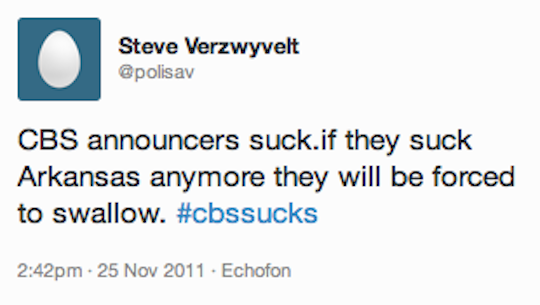 Commenting about a game against the University of Georgia in December 2011, Verzwyvelt said it was "like LSU was kicking a blind kid."

Though he too called him a "douchebag," Verzwyvelt defended former Rep. Anthony Weiner (D., N.Y.) during the revelations of his sexting scandal. "Douchebag he may be, @repweiner shouldn’t have to resign until David Vitter does. Only think broken in #WeinerGate were vows," he wrote on June 6, 2011. 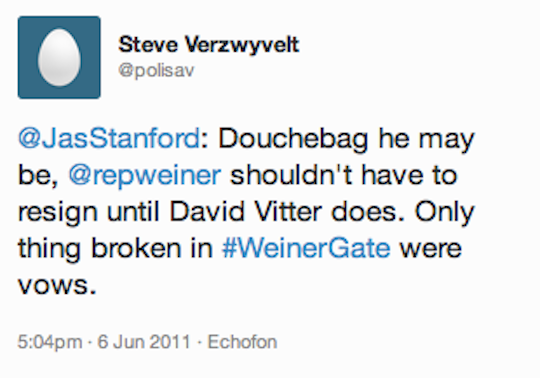 Verzwyvelt also called John Fleming, a Republican Congressman from Louisiana, a "proud member of the American Taliban," in August 2010. His tweet came after Fleming had said he wants America to remain a Christian nation.

One of his favorite targets is former Pennsylvania Sen. Rick Santorum (R.) who he said, "needs birth control, not a bedroom," in September 2012, likely alluding to the fact that Santorum and his wife have seven children.

Verzwyvelt also tweeted out a crude website associated with Santorum when he was running for president, in which opponents offered their own definition of his name. 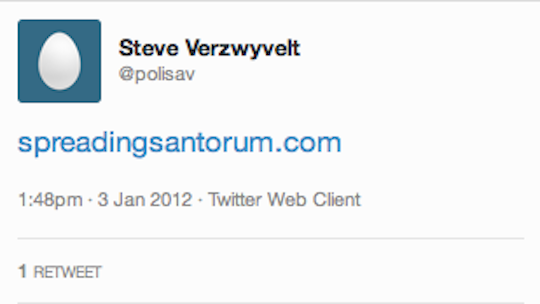 He tweeted several offerings for the hashtag game "#replaceawordinamoviewithtampon" during the debate over late-term abortion laws in Texas. Verzwyvelt came up with "Tampons Gone Wild: legislative edition."

Another tweet compared Sarah Palin’s daughter to a star of MTV’s "Jersey Shore." "Bristol Palin and Snooki should be the poster children for birth control," he said in March 2012. "Like we need more of them running around."

"Think born-again on the CNN poll refers to virgins or Christians or both?" Verzwyvelt asked in January 2012.

King recently attacked Martinez in a campaign email because of comments she and her staff made four years ago. Martinez mocked New Mexico’s Commission on the Status of Women, and asked, "what the hell is that?" in 2010, according to the Mother Jones report.

"Gov. Martinez’s comments about women are deeply offensive to me," King said. "The Commission on the Status of Women was signed into law by my father Gov. Bruce King in 1973. While she may think it was cute or funny to pretend she didn’t know what the Commission did at the time, Martinez went on to abolish that useful body which did important work with at-risk girls and displaced women and mothers in our communities."

"We now know that the public persona of Susan Martinez that has been crafted by her image-makers differs starkly from who she really is," King added. "The grandmotherly person we see on her TV ads reading patiently to children and hugging an elderly veteran is not the real person."

Reached by phone, Verzwyvelt blamed the tweets on his account being hacked in the beginning of 2012.

After listening to many of the tweets read back to him, Verzwyvelt said he did not recall sending them.

He blamed the tweets about LSU football games on team spirit. "As you know, in the south everyone is very passionate about supporting their team," he said.

When asked if New Mexican women would find his comments offensive, Verzwyvelt said, "I would assume that they probably would, but like I said my account was hacked at the first part of the year."

"If I did that would have been a mistake," he said.  "I respect women highly, I’ve been in a relationship for the past three years, all of my candidates in 2012 were women.  I’ve actually fought for women on their issues and getting them elected office."

"I’m a huge supporter of women and their issues, I really don’t recall," he said.