Chief Washington Correspondent for CNBC John Harwood, who also moderated a Republican presidential primary debate, told the Clinton campaign he was dumbfounded that journalists would ask Hillary Clinton about her email scandal.

In an email to Campaign Chairman John Podesta and adviser Jake Sullivan, Harwood said he found it "amazing" that journalists would ask about Clinton possessing classified information on a private email server, since she was "likely" going to be the next president.

"[A]mazing…" Harwoord began in the email dated Sept. 27, 2015. "……that some people still think it's worth burning so much interview time with person most likely to be next president on her emails." 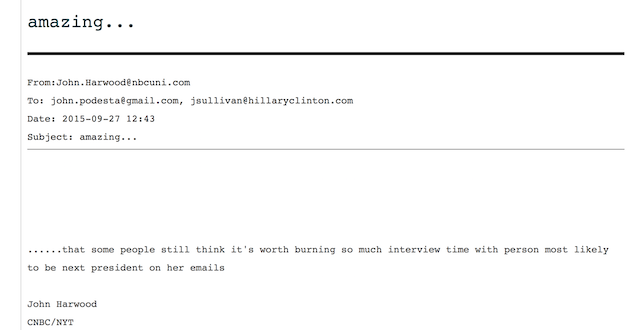 An earlier batch of emails released by Wikileaks revealed Harwood giving advice to the campaign, and bragging about how he went after Donald Trump during the debate.

Despite Harwood's reservations to ask about Clinton's emails, her use of a private server has continued to be an issue for her campaign. Investigation notes released by the FBI this week showed that a State Department official who had worked under Clinton "pressured" the FBI to declassify an email in a "quid pro quo" deal to place more FBI agents overseas.