The United Nations has formally endorsed and approved scores of anti-Israel and anti-Semitic hate groups that promote terrorism against Jews from within the halls of Turtle Bay and elsewhere, according to a new report that exposes how these organizations have been granted privileged status by the U.N., potentially in violation of the international body's own bylaws.

The U.N. has formally accredited scores of non-profit organizations that use their legitimacy to spread anti-Semitic propaganda promoting terrorism against Israel and Jews, according to an in-depth new expose by Human Rights Voices, a watchdog organization.

The report, which provides pictorial evidence of this behavior, exposes how these organizations use their U.N.-accredited stature to slander the Jewish state and promote terror groups such as Hamas.

The report is likely to galvanize the Trump administration and pro-Israel supporters in Congress to further scrutinize the U.N.'s systematic promotion of anti-Israel propaganda, according to those familiar with the matter.

The Trump administration has already removed the United States from a U.N. cultural organization known as UNESCO due to its repeated efforts to pass anti-Israel resolutions that claim Jewish historical sites do not belong to the state of Israel.

The latest report provides many examples of U.N.-accredited non-profits railing against Israel in often vitriolic and anti-Semitic ways, which appears to violate the U.N.'s own restrictions on how accredited groups can behave. 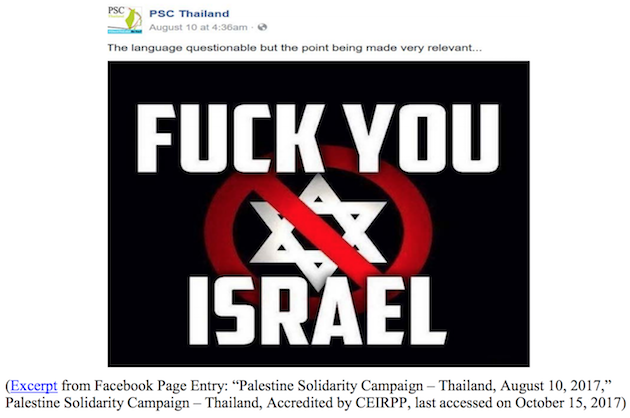 Anne Bayefsky, senior editor of Human Rights Voices, told the Washington Free Beacon that many of the 6,200 non-profits operating at the UN have used their global legitimacy to promote bigotry, anti-Semitism, and, at times, terrorism.

"The United Nations was founded as a global pact among states, but over the decades—in the name of transparency and openness, and in order to further the aim of globalization—the U.N. has opened its doors to non-governmental organizations," Bayefsky said. "More than 6,200 NGOs [non-governmental organizations] have been invited to participate on a year-round basis in U.N. activities, and have thus been handed a coveted global megaphone."

"An examination of these NGOs, however, reveals that both by design and gross negligence on the part of U.N. member states, the NGOs' ranks include bigots, anti-Semites, and terrorist advocates who are now spreading hatred and inciting violence from the world stage," she said.

Sen. Marco Rubio (R., Fla.), the author of legislation that would withhold U.S. funds from the U.N. in a bid to combat rampant anti-Semitism, told the Free Beacon that American taxpayers should not be funding an organization that mainstreams hatred towards Israel.

"Far too often, the United Nations and related organizations are being used to discriminate against the Jewish state of Israel and promote anti-Semitism," Rubio said. "After the United States rightly withdrew from UNESCO in response to the vile anti-Israel agenda of its member states, the Trump administration and Congress should continue working together to promote accountability and ensure that Americans' tax dollars are not used to further hateful, anti-Semitic agendas."

The latest report accuses the U.N. of turning a blind eye to the behavior of these non-profit groups, which have not been held accountable for their promotion of anti-Semitic materials.

"Most striking for an organization founded on the ashes of the Holocaust, the U.N. enables its accredited NGOs to play a central role in promoting modern anti-Semitism," the report states. "Although the preamble of the U.N. Charter promises the equal rights of nations large and small, U.N.-accredited NGOs foster the destruction of the U.N. member state of Israel."

U.N. accreditation gives these anti-Israel non-profits a veneer of legitimacy that enables them to spread anti-Semitic and anti-Israel propaganda within the halls of the U.N. and elsewhere, according to the report.

These groups can secure meeting space within official U.N. buildings and sponsor speakers, exhibits, and other materials "within immediate proximity to the world's press," according to the report.

They also are permitted to speak at key U.N. meetings, where their rhetoric is often broadcast across the globe.

Organizations promoting hatred of Israel and terrorism have retained their U.N. accreditation despite this rhetoric violating the international body's rules, according to the report.

"The links between U.N.-accredited NGOs and the promotion of terrorism and hatred—including, in particular, anti-Semitism—violate the terms and conditions of these NGOs' accreditation," it states. "In some cases, these NGOs were originally accredited by U.N. bodies in spite of these links. In other cases, while these links may have developed after the original accreditation processes, U.N. bodies—including those that conduct periodic review processes—permit such NGOs to retain their U.N. status while violating the fundamental principles of the institution."

"Once gained," the report found, "U.N. status is highly unlikely to be revoked."

Many of these U.N.-approved groups accuse Israel of perpetuating a "Holocaust" against the Palestinians and disseminate offensive imagery portraying Jews in a negative light, a classic trope of anti-Semitism.

Others accuse Israel of buying American support, claiming Jewish people have some ability to manipulate the global state. 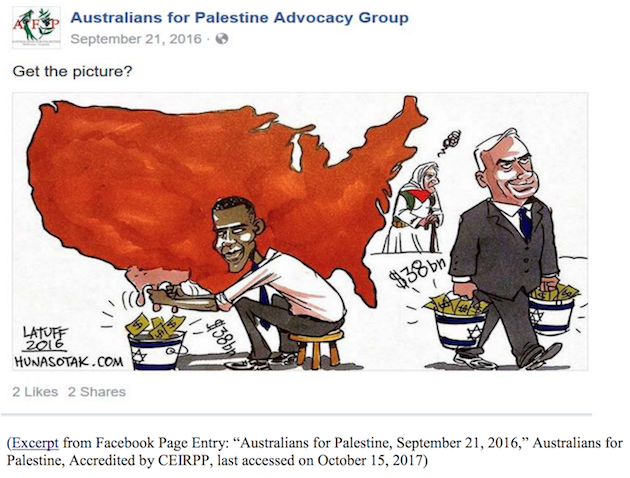 Other examples of this propaganda includes support for the terror group Hamas, as well as the promotion of violent attacks on Israel and Jews. 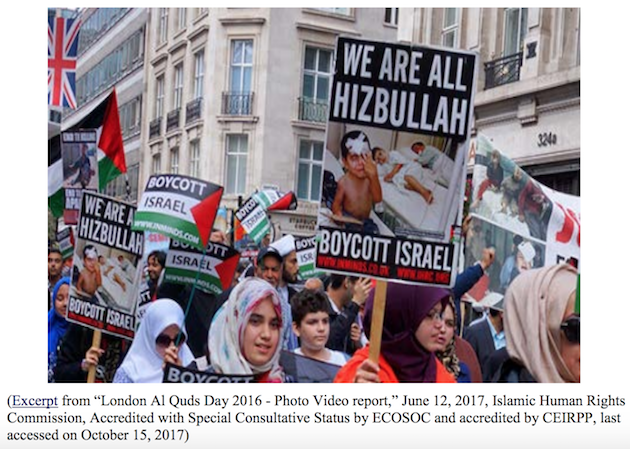 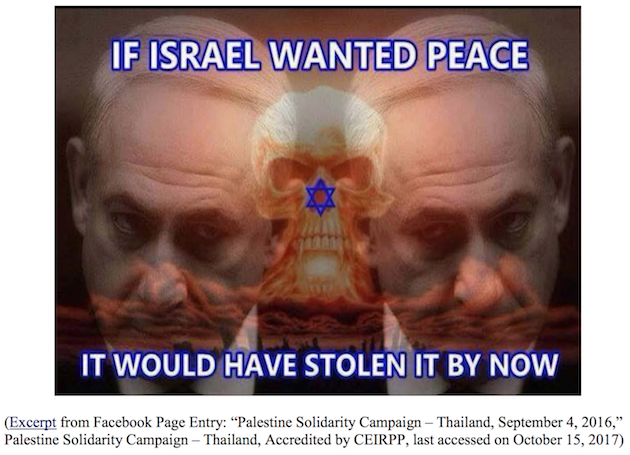 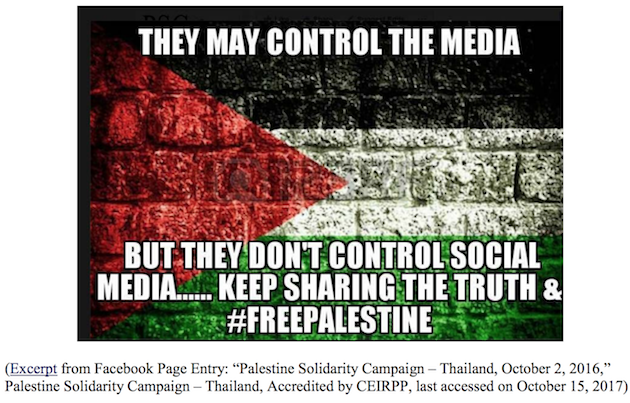 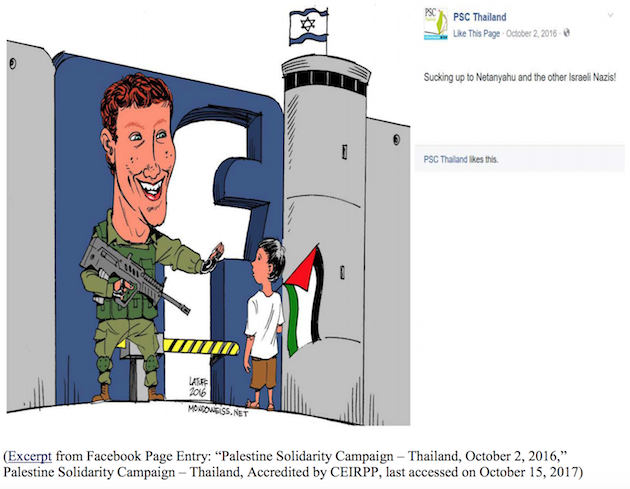 Update 4:02 p.m.: This post has been updated to reflect new information.