Missile warheads likely to be used in car bombs

Four missiles and two tracked, mobile SA-6 launchers were captured by the group, the officials said, adding that it is uncertain whether the associated fire control radar and other equipment needed to fire the missiles were captured.

Russian military forces, concerned that ISIS would use the anti-aircraft missiles against its warplanes, conducted airstrikes to try and destroy the SA-6s. But the Russians missed and the missiles were moved from the Dayr Az Zawr area and hidden, officials said.

A photo of a captured SA-6 was posted by an ISIS social media account on Jan. 20. 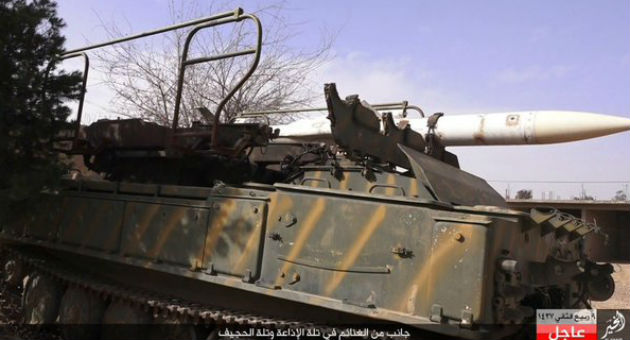 Asked about the SA-6 missiles, a military official in the region said the weapon is an unlikely threat to aircraft. However, missile warheads could be used by ISIL in suicide vehicle bombs.

"All they have is the missile, which could be used to make IEDs or truck bombs," the official said. "They lack the launchers and radars."

Additionally, ISIS probably lacks the expertise needed to use the launchers, even if they were able to capture those items, this official said.

Asked about the SA-6 missile threat, Col. Steve Warren, a spokesman for the U.S.-led military coalition in the region, said pilots are aware of the dangers.

"Coalition aircraft employ sophisticated self-defense measures on every mission," Warren told the Free Beacon. "Make no mistake; our pilots are in harm’s way, but force protection is our top priority."

The SA-6 is an older air defense system that has been in service around the world since 1970. The missile is armed with a 130-pound high-explosive warhead.

ISIS conducted a deadly suicide car bombing on Feb. 9 in Damascus. The blast at a police club killed eight people and wounded 20 others.

James Clapper, director of national intelligence, testified to the Senate last week that ISIS "has become the preeminent terrorist threat because of its self-described caliphate in Syria and Iraq, its branches and emerging branches in other countries, and its increasing ability to direct and inspire attacks against a wide range of targets around the world."

According to Clapper, ISIS has set up eight full-scale branches, with several more emerging around the world.

Recent attacks included the November terrorist attack in Paris and the downing of a Russian airliner in the Sinai in late October.

An international investigation into an ISIS attack in Syria last August concluded that at least two people were stricken from exposure to mustard gas.

"We continue to track numerous allegations of ISIL’s use of chemicals in attacks in Iraq and Syria, suggesting that attacks might be widespread," Clapper said, using an alternative acronym for the terrorist group.

"ISIL is now somewhat on the defensive and its territory and manpower are shrinking, but it remains a formidable threat," he said in Feb. 10 testimony to the Senate Armed Services Committee.

Marine Corps Lt. Gen. Vincent Stewart, director of the Defense Intelligence Agency, said ISIS continues to control large portions of territory in Syria and Iraq, though he described the group as coming under pressure as a result of coalition air operations.

"In 2015, coalition airstrikes impeded ISIL's ability to operate openly in Iraq and Syria, curtailed its use of conventional military equipment, and forced it to lower its profile," Stewart said in testimony with Clapper.

Brett McGurk, presidential envoy for the coalition against ISIS, revealed new details of the effort to counter the Islamic State during a House hearing last week.

"We are now at a phase, I am pleased to report, where simultaneous pressure is being applied and beginning to choke ISIL in its heartland," McGurk told the House Foreign Affairs Committee on Wednesday.

Turkey’s government is taking steps to close off a key stretch of border with Syria, an effort that has decreased the flow of resources and fighters for ISIS.

Additional military pressure is being applied to the ISIS capital of Raqqa in eastern Syria, "and this pressure should continue to grow over the coming weeks and months," McGurk said.

"ISIL is now slashing its fighter salaries and increasing taxes on local populations" as a result of the pressure, McGurk said.

In Iraq, McGurk would not outline the timetable for retaking the key city of Mosul, now under ISIS control, but said operations against ISIS there are being carried out. "This slow and steady suffocation is now underway," he said.

McGurk said ISIS controls over 80 percent of Syria’s energy resources, infrastructure, and assets, which have produced some $500 million a year since 2014.

"These numbers are now being reduced," he said. "ISIL oil revenues are down by about 30 percent."

A key to success in curbing ISIS finances was the U.S. special operations raid last spring to kill the terror group’s financial chief, Abu Sayyaf, in May.

"These documents gave us tremendous insight into ISIL’s financial situation and its vulnerabilities, which we are now exploiting."

Some 1,600 people, including many foreign terrorists, have been involved in a highly-centralized ISIS program aimed at selling gas and oil.

"Needless to say, many of these individuals are now dead—and the network is no longer able to operate in the open," McGurk said.