Intel: Twice as Many Former Gitmo Inmates Returning to Terrorism

The number of detainees released from the Guantanamo Bay prison who have reengaged in terrorism has doubled since July 2015, according to a new report issued by the Office of the Director of National Intelligence (DNI).

The report, which is published every six months, showed that as a greater number of detainees were freed by the Obama administration, more were suspected of turning back to terrorism and taking up arms in the fight against U.S. interests.

In July 2015, DNI flagged six former detainees who were believed to have rejoined the terror movement. One year later that estimate has increased to 12, as the Obama administration attempts to shut down the detention facility and relocate at least 60 remaining inmates onto U.S. soil.

A total of 118 out of 676 freed former detainees were confirmed of having reengaged in terrorist acts since 2009. Around 30 have been killed on the battlefield, while 25 have been taken back into custody. At least 63 remain at large, according to the DNI’s latest findings.

The U.S. intelligence community suspects that another 86 freed inmates have returned to terrorism. Of these 86, four have been killed, 17 have been taken back into custody, and 65 remain at large, the report states.

The recidivism rate for former detainees remains around 30 percent, according to Pentagon officials.

Since January 2009, at least seven of 144 freed detainees have been confirmed as returning to the battlefield, according to the DNI; the U.S. suspects that an additional 12 former inmates have reengaged in terrorism. 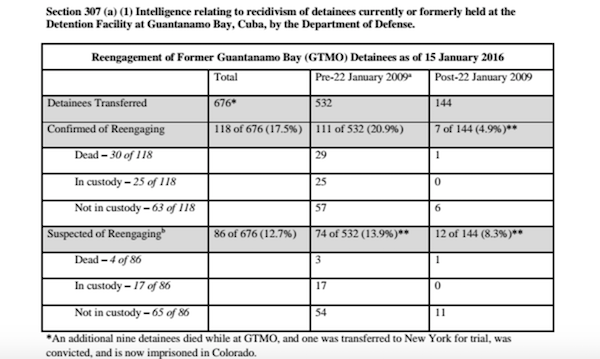 The Obama administration has pursued a policy to clear and free as many Gitmo inmates as possible. The administration has informed Congress that it will unilaterally take steps to shut down the prison even though this would violate U.S. law.

As many as 37 inmates have been released from Guantanamo since 2015, with 17 inmates released in January alone. Fewer than 100 inmates remain imprisoned at the facility.

The administration’s plan came under fire last month when it was discovered that al Qaeda’s new front man was a former Gitmo detainee.

Ibrahim al Qosi, a former Gitmo inmate released to Sudan in 2012 by the Obama administration after he was cleared as a low-level risk, recently emerged as a top leader of Al Qaeda in the Arabian Peninsula.

Sen. Mark Kirk (R., Ill.), who has authored several laws blocking the transfer of detainees to the United States, told the Washington Free Beacon that the administration seemed apathetic about inmates who have been caught back on the battlefield.

When asked last month about Qosi’s return to terrorism, Secretary of State John Kerry responded that he was "not supposed to be doing that."

"Secretary Kerry's testimony that released prisoner Ibrahim al Qosi in Sudan is ‘not supposed to be doing that' indicates that there is no plan for preventing terrorists from rejoining the fight to kill Americans," Kirk told the Free Beacon.

The law currently requires the Obama administration to notify Congress 30 days before transferring any detainee to a foreign country. Kirk and other lawmakers have pursued additional measures to limit the amount of foreign aid disbursed to countries that accept inmates.