Pfizer Hit With Lawsuit Over Fellowship That Excludes Whites and Asians

Pfizer is being sued for excluding whites and Asians from its prestigious "Breakthrough Fellowship," a nine-year program that includes a fully funded master's degree and guaranteed employment with the pharmaceutical giant.

Because Pfizer accepts reimbursements from the government, the lawsuit says, "All its operations—including the fellowship—are covered by" Title VI and Section 1557. That means the company could lose federal money if it does not change its application criteria, which explicitly restrict the Breakthrough Fellowship to "Black/African American, Latino/Hispanic, and Native American" students.

The plaintiffs are two Ivy League students who meet the academic requirements for the fellowship but cannot apply because of their race. They are asking a New York district court to block Pfizer from selecting fellows for the 2023 class and to force the fellowship to use race-blind criteria going forward.

"Racial discrimination is fundamentally 'immoral,' 'inherently wrong,' and 'destructive of democratic society,'" the lawsuit reads. It "demeans us all the same even when it is done by private entities."

The fellowship's application criteria—hailed as a "bold move" on the company's website—sparked outrage from civil rights experts, five of whom told the Washington Free Beacon in August that a lawsuit against Pfizer would almost certainly succeed. Adam Mortara, a prominent conservative attorney, called the program "flagrantly illegal"; Gail Heriot, a member of the U.S. Commission on Civil Rights, called it a "clear case of liability" under federal law. Though Do No Harm's complaint does not invoke Title VII, the federal statute banning race discrimination in employment, all five attorneys said that the fellowship likely violates that law as well.

"We do not comment on pending litigation," Pfizer told the Free Beacon. "Pfizer is an equal opportunity employer proud of its commitment to diversity, equity, and inclusion."

The lawsuit comes as a growing number of corporations face legal complaints over their race-conscious policies. In July, a white woman filed a class-action lawsuit against Amazon over a program that gives minority entrepreneurs a $10,000 stipend to launch their own delivery start-ups. And in August, a group of Starbucks shareholders sued the coffee giant over a policy that pegs executive pay to workforce diversity. Other companies, including Google and IBM, have scrapped race-conscious policies amid legal concerns.

Do No Harm is also demanding that Pfizer stop promoting its fellowship on the grounds that New York State law forbids discrimination in advertising. In an informational video about the program, Pfizer promises 100 fellows "from underrepresented groups" by 2025. 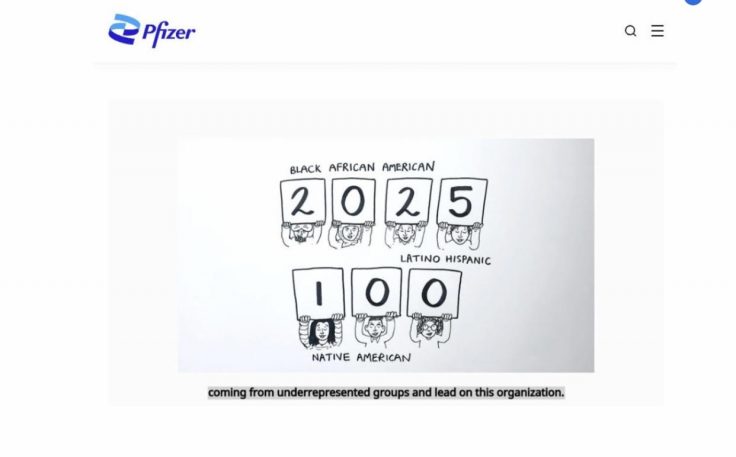 Update 2:17 p.m.: This piece has been updated with comment from Pfizer.